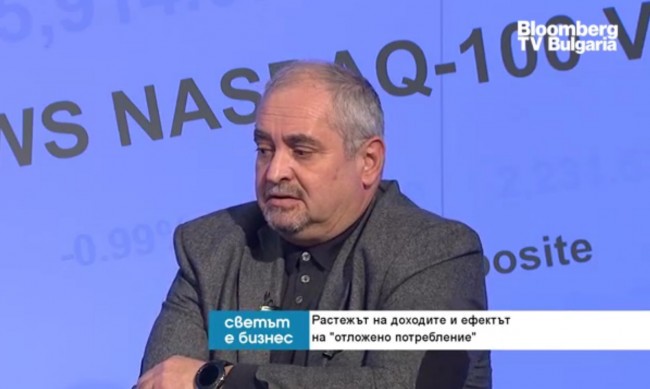 Bulgaria has built an economy that does not envisage an active economic policy. It does not have the opportunity to encourage and accelerate economic growth in our country. The introduction of the euro will not lead to serious inflation.

This was stated in an interview with BGNES by Assoc. Prof. Viktor Yotsov, a lecturer at the Department of Finance at the University of National and World Economy.

How will we reach the Europeans, will we catch up with them if …

“Governments may try to bill GDP growth in the second quarter of 9.9% as a success, but in reality, they have no credit for it. Every economist who deals with statistics knows that this is the so-called statistical growth. “As there was a big drop last year, the level of production had fallen, now even if you restore this production to last year’s levels does not mean that you have had growth,” said the financier and former deputy governor of the BNB.

He stressed that from this growth that we have now – about 9.9%, the real growth, which is above the trend from last year will be very small.

“In any case, this 9.9% should not make us happy, they will only be this quarter and the next, when the decline from last year passes. Then again we will stay on the growth that we see in the last 3-4 years about 3-4%, which is close to the potential. This means that economic policy does not have the opportunity to encourage and accelerate it, “said Assoc. Prof. Yotsov.

He stated that there is no way to have accelerated and catching-up development of Europe with 3% growth, given that the average for Europe is 2%, and for the new member states with which we went together, it is comparable and higher than the Bulgarian one.

According to him, one should not be enslaved to the notion that debt and deficit are necessarily bad things. It all depends on whether it is a deficit that is formed for spending or is an investment.

“If we have a meaningful economic policy with some goals, even if we have a temporary deficit and debt, this will be justified and in time will be expressed in higher growth, which will really be catching up. We do not have such a policy. “Observing how confused and unclear the political situation in our country is, I do not see the conditions for this to change in the short term,” the financier said.

The main reason for inflation, which has now become a global problem, is rooted in the still inexperienced shock of disrupting global supply chains. This, combined with the gradual exit from the pandemic and the acceleration of growth, leads to accelerated inflation.

“The question is whether this will be a short-term phenomenon in the next few months to a year or will be rooted in the expectations of economic agents, the population and companies. It is difficult to answer at this stage. The Fed and the ECB insist that this is a transitional phenomenon that will be experienced. We are yet to see “, commented Assoc. Prof. Yotsov.

He drew attention to the fact that huge liquidity was poured into the markets, that the effects of the global financial crisis were combined with the effects that occurred as a result of the pandemic.

“In both cases, the opposition was from the central banks with a massive infusion of liquidity into the system. This inevitably leads to inflation expectations and worries, “added the financier.

We have no benefit if we are outside the euro area

High inflation coincided with Bulgaria’s preparations for joining the eurozone. We are interested in whether it could create any complications for the achievement of this strategic goal, with which Bulgaria will become a truly full member of the European family.

“Ulysses in our political worries and the now rising inflation, we have forgotten that since last year we have entered a period in which we are being monitored within the framework of the exchange rate mechanism, the notorious ERM-II. One of the criteria we must meet during this period is inflation. It is global and not just here, but throughout Europe. But there is every reason to believe that in our country it may be a little higher and there is a danger that we may not be able to meet the inflation criterion, the so-called The Maastricht criterion for inflation “, warned Assoc. Prof. Yotsov.

When asked what can be done in this situation, the financier answered that the possibilities are not many.

“Bulgaria has no monetary policy because we are in a currency board. Our fiscal policy is also very limited, as the Public Finance Act imposes restrictions on both the deficit and the amount of expenditure that can be incurred. We have built an economy that does not provide for a very active economic policy. This reduces the chances of counteraction. And what can be countered is to somehow reduce aggregate demand in order to reduce, possibly, inflationary tensions. And we do not have such tools. I’m a little worried. If inflation accelerates, if the inflation expectations of the population increase, I can’t imagine what tools we will use to counteract, “said Assoc. Prof. Yotsov.

At the same time, he said there would be no dramatic effects around the adoption of the euro. Suffice it to look at countries that are close to us as an economic structure, such as the Baltics. In two of them, there was even a currency board and the introduction of the euro went smoothly, without fears of inflation. “Even if the introduction of the euro leads to inflation, it will be very short-term, very small, rather in rounding off some prices, rather than serious inflationary processes,” said Assoc. Prof. Yotsov.

He warned that the euro alone cannot provide us with economic growth, it can give us some capital inflows because there will no longer be currency risk.

“We have been on the currency board for 24 years. The expectations and attitudes of economic agents are that the exchange rate is fixed. No one expects any benefits from a change in the exchange rate. That is why I am an ardent supporter of the euro. The sooner we accept it, the better, because at this stage we do not have the benefits of the euro – security, direct access to the ECB, and lending from there, but we have all the negatives – we do not have monetary policy, our interest rates are not set by the CB, and we take them from the ECB. Just like it will be when we enter the eurozone. Ie we do not use the benefits, we have the negatives. Why should we stay outside? ”, Said Assoc. Prof. Yotsov.