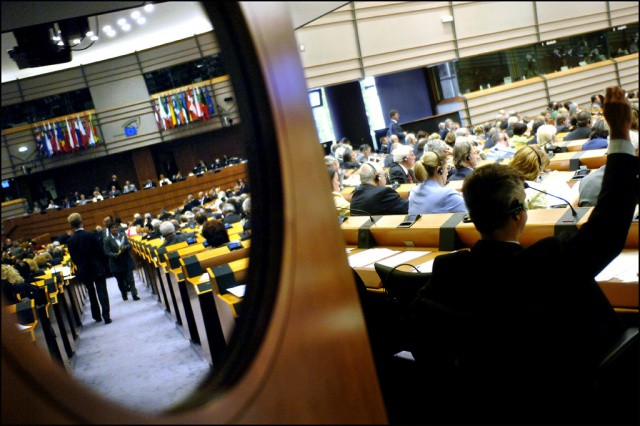 A long-time former associate of a “far-right Bulgarian MEP with shady Russian ties” is suspected of acting as an intermediary between Russian special services and officials of European institutions. This was reported by the Brussels publication EUobserver in a publication about the spies in the Russian representation in the EU.

The name of the collaborator is known to the editors, but the journalists do not reveal it.

The text adds that this is one of the dubious cases of penetration of Russian intelligence into EU institutions. The woman has changed her name and is applying for internships under EU programs as well as in media based in the Belgian capital.

“Her biography includes specializations at the College of Europe in Bruges, where many of the future EU officials study. And she also teaches yoga in a cozy suburb of Brussels, where many of the staff of the European institutions live. Her profile shows that she might be an intermediary for Russian services,” a Western intelligence source told EUobserver.

Bulgaria has two representatives in the European Parliament who, according to the standards of Western media definitions, correspond to “extreme right“.

The first is Angel Djambazki, a member of the European Parliament since 2014, when he entered as a candidate of a coalition between “Bulgaria Without Censorship”, IMRO, ZNS and “Gergiovden”, and in 2019 – of IMRO-BND.

At the moment, the names of 11 collaborators are listed on his page in the European Parliament, but there is neither their nor his CV. He is, among other things, a member of the Special Committee on the issues of external interference, including disinformation, in all democratic processes in the European Union.

The second is Andrey Slabakov, MP since 2019 with 10 associates. And there are no biographies of his collaborators or himself on his page.

Each MEP has almost 27,000 euros a month to hire advisers and interns, who do not necessarily have to be EU citizens and are not vetted by national intelligence services or EU security, EUobserver points out.

“Russia still has over 100 diplomats in Belgium and about half of them are spies”, said a source from the Belgian intelligence services

Another of the dubious cases reported by the publication is related to Tamara Volokhova, who began her career in Brussels as an adviser to an MEP from Marine Le Pen’s nationalist party. She was suspected of “helping Russia to recruit politicians from the European institutions”.

She was a candidate in May for municipal councilor in Strasbourg, she was born in Rostov-on-Don in a family of Ukrainians. At the age of 17, he went to study in France at the “Robert Schumann” University and joined the European Parliament as an intern, where he works to this day. She has been a member of Le Pen’s party since 2014, and a French citizen since 2016. “I am an example of successful assimilation. I assure you that I am not the eyes of Moscow, an influencer or even less – a top model,” insists Tamara.

Dozens of MEPs are openly pro-Russian, continues EUobserver in the article “Who are the Russian spies in the corridors of the EU”. “36 far-right and independent MEPs from parties such as France’s Rassemblement national, Germany’s Alternative für Deutschland and Belgium’s Vlaams Belang voted against the resolution in June to give Ukraine EU candidate status. Many fringe MEPs visit Russia and its occupied territories with fictitious election observation missions that may actually act as spies-recruiting trips.”

Janusz Niedzinski, one of the organizers of such trips, was arrested in Poland last year on charges of cooperation with Russian special services. He has built close relationships with British, French and Polish Eurosceptic MEPs in the European Parliament.

Russian agents do not recruit their sources in the EU at official meetings in Berlemont, the headquarters of the European Commission, a Belgian security source told EUobserver: “There are much better places in Brussels for this work like sports clubs where you can play tennis and take a sauna.” In addition to meetings at a professional level, diplomats from the EU, NATO, Belgium, Russia, etc. meet at the same bars, parks and restaurants.

The publication explains that there is no profiling of the Russian agents – Dmitry Filipyonok, expelled last year as an FSB agent from the NATO representation, actually registered as a participant in conferences in the European Parliament for the protection of democracy.

“Every visitor with diplomatic status must be declared, registered and greeted at the reception desk. He cannot enter alone, walk freely or in the buildings must be accompanied by an MEP or an employee of his staff. If they show up without prior appointment, they cannot go further than reception,” explains a spokesperson for the EU’s External Relations and Security Service.

“It is needless to say that in the EP Russia has connections with people who are not Russian and work for the Russian services undercover,” commented a Belgian source from the security sector. “Parliament is the weakest link in terms of the security of the European institutions,” says a Western intelligence source.