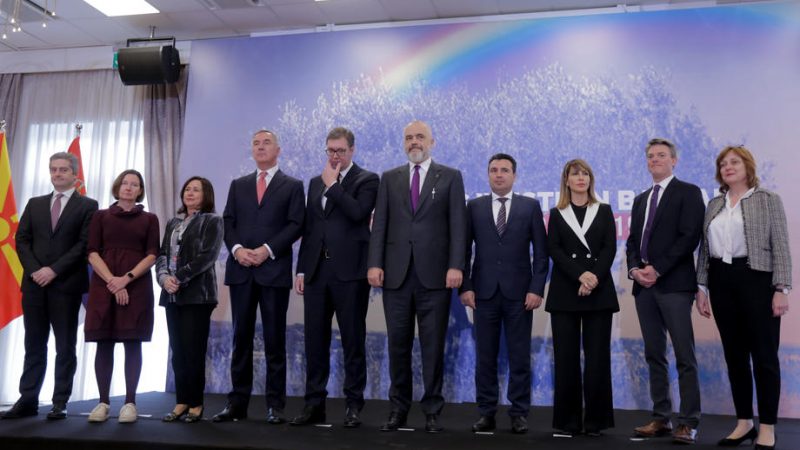 Witnessing the leaders of Serbia, Albania, and North Macedonia share a moment of collective jubilation is not something that happens every day, especially in a region known for its past rifts and differences.

Called the Open Balkan initiative, the idea of forming a common market for countries waiting for EU membership was previously known as Mini-Schengen Area.

The initiative is trade-heavy, and it promises free movement of goods and citizens and equal access to labour markets. Participating countries would save up to $3.2 billion (€2.71 bn) each year, according to World Bank estimates.

A previous attempt was made during the Berlin Process, a German-led cooperation initiative designed for the Western Balkan countries, which never culminated in a binding agreement.

The Berlin Process started in 2014 was meant to assuage increased Euroscepticism in the region after then-EU Commission president Jean-Claude Juncker announced a five-year moratorium on the union’s admission of new members.

Seven years later, the region’s countries are trying to prove they can do things on their own, with or without the EU’s help.

Belgrade to Tirana without any checks?

Albanian PM Rama said in Skopje that the move is aimed to prevent the Western Balkans from getting stuck in “a small caricature of the EU, where for everything you need consensus and everyone can block through a veto”.

Rama, who has been increasingly more vocal in his criticism of the EU approach to accession, was backed by PM Zaev. Although EU membership remains a goal for all three, “until the EU decides, we need to find ways to continue the process of Europeanisation,” said Zaev.

Both the Albanian and Macedonian leaders have been critical of Bulgaria’s veto on the two formally opening accession talks due to the ongoing language debate between the two, with Bulgaria claiming issue with calling the language spoken in North Macedonia Macedonian.