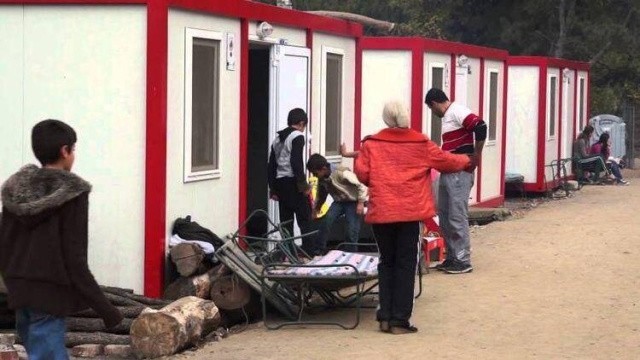 The Ministry of Internal Affairs (MIA) will open up more than 1,200 places for refugees in containers in Lyubimets near the refugee accommodation center there. The measure is necessary because of the increased migration pressure, which in the last week of August caused 90% of the places in the homes for foreigners to be filled.

Read more about the overcrowded refugee camps in Bulgaria here.

Thus, 1239 places out of 1368 are occupied at the moment. They also include newly opened over 300 places again in Lyubimets. The MIA centers are the first to house detained migrants, then depending on whether people seek protection or not, they are transferred to the refugee agency’s homes. The places there were half full by the end of August.

It’s the period in which the department, whose leadership has long warned of increased migration pressure, also announced increased border controls, including drones and additional troops, after a crash between a bus and a police car that killed two law enforcement officers. The Deputy Chief Secretary of the Ministry of Internal Affairs even announced that 1,000 foreigners, mainly from Afghanistan and Syria, are being detained.

The unveiling of new 1,200 places in Lyubimets will be in equipped containers – “buildings”, which are already located in the yard of the city center. They were deployed in October 2021. Their main goal then was to provide a larger area and safety according to the anti-epidemic measures for both the residents and the staff of the home.

The MIA’s data analysis on the state of special homes for temporary accommodation of foreigners indicates that for the first eight months of 2022, the number of accommodated foreign citizens has doubled compared to the same period last year.

The data of the Ministry of Internal Affairs also show that for the last week of August, most of the detainees were Syrians. A similar trend has been observed since the beginning of June. In previous years, a larger proportion of foreigners passing through the country were people from Afghanistan. It is not known what the reasons are for most of the Syrians but most likely their movement is due to the situation in Turkey.

The measures against migrants have already produced results, the authorities announced

The measures taken by the state against migrants and traffickers are already yielding results, acting Minister of Internal Affairs Ivan Demerdzhiev said today. Together with the Minister of Defense Dimitar Stoyanov, he visited the Bulgarian-Turkish border in the Elhovo area. A week ago, the authorities declared a war on migrants after a bus with migrants crashed into a police car in Burgas and two Ministry of Internal Affairs officers were killed.

According to Demerdzhiev, the migrant pressure has halved and if before there were more than 1,000 attempts to cross the border per day, now there are 500.

The minister pointed out that, in addition to the increased security, the reason for this is also the intensive work against the traffickers. “We collected information from all services. We made lists of the persons who are engaged in this activity. They are wanted and we made their work very difficult,” Demerdzhiev also said.

The next measures are road repairs to allow for faster deployment of forces, bringing in more equipment, including drones, and meetings with the Turkish authorities. They will be asked not to gather too many migrants in one place. Demerdzhiev emphasized that there is speculation about the state of the fence along the border, as in most cases it can be overcome with ladders, within a minute, and not through holes in it.

Ivan Demerdzhiev pointed out that several cases involving Ministry of Internal Affairs officials in the trafficking industry are already being worked on. It is mainly about mid-level management. “There will be changes in personnel and criminal proceedings,” the minister threatened.

According to Demerdzhiev, at the moment it cannot be said that the migrant centers are overcrowded, as only one of the several container settlements is open. He believes that with the measures taken, the construction of new accommodation will not be necessary.