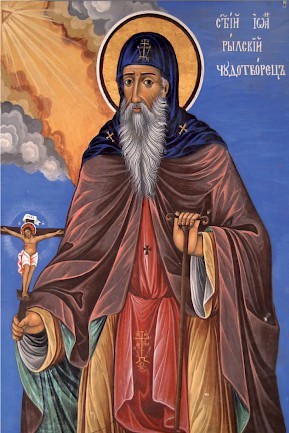 On October 19, Bulgarian Orthodox Church honors the memory of the most prominent Bulgarian saint, declared also all-Bulgarian heavenly protector – Venerable John of Rila, the Wondermaker. He was a cleric, later became a hermit, and was a famous Bulgarian saint even long before his death.

John of Rila is patron and founder of the largest stauropegial (self-governed, established by the head of the Church himself) monastery in Bulgaria – Rila Monastery, patron of the Bulgarian awakeners.

He was born probably in 876 in the village of Skrino near Dupnitsa and died on August 18, 946. He lived during the reign of Prince Boris I and Tsar Simeon I the Great. His most active years were during the reign of Tsar Peter I (927-969). His main holiday in the Orthodox calendar is Father’s Day on October 19.

Today is also the Day of the Bulgarian doctor as John was famous for his ability to cure diseases, also in a magical way.