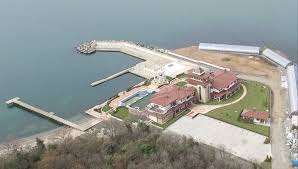 The Supreme Administrative Prosecutor’s Office (SAP) in Rosenets Park, where the summer beachside mansion of the honorary chairman of the MRF Ahmed Dogan is located, has established numerous violations following its inspection – lack of investment design and project documentation, no building permits issued, as well as data related to document falsification, reported Dnevnik. Based on them, it can be concluded that over the years he has proceeded with construction without going through the usual procedures and no one controlled what was built there.

The inspection, which began after the leader of “Democratic Bulgaria” Hristo Ivanov tried to land on the beach in front of the mansion, but the NSS guards prevented him from doing so, found that:

– The coastal beach does not have the status of a sea beach, and there is no free access to it. It is restricted by the installed metal fence panels;

– For a land property that is state property, there is no established deed of state ownership.

– The marina in front of the mansion does not have an approved investment design and a building permit;

– Construction-related papers are not stored and there are no requests for issuance of a construction permit for a bridge – a quay wall;

– The port does not have an operational suitability certificate;

– For the buildings around Ahmed Dogan’s main mansion – bungalows, buildings and a greenhouse, no construction documents have been presented, and no approved investment design and building permit have been found at the Municipality of Bourgas;

– The building hosting the security guards of the site does not have a building permit either;

– There is evidence of a document falsification, as the extension of the port was not carried out in the 80s of the last century, as specified in the notary deed. The material evidence for this has been sent to the state prosecution;

According to lawyers, the lack of a building permit means that construction is illegal and must be removed. Even if Dogan decides and wants to legalize the construction, he will first have to demolish it and then start the procedure again.

According to the Prosecutor’s Office, “A letter has been sent to the Head of the National Construction Control Directorate under the MRDPW regarding the established construction of the marina and the lack of a building permit and approved investment design, as well as the fact that the construction is classified as category III, so that NCCD can exercise its powers by taking specific measures and actions to eliminate the violations and their consequences, notify the Supreme Administrative Prosecutor’s Office accordingly and send copies of the deeds.”

This means that the Head of the National Construction Control Directorate will have to issue an order to remove the illegal construction.

The data related to document falsification will have to be examined by the Prosecutor’s Office, which will decide whether to initiate pre-trial proceedings and against whom.