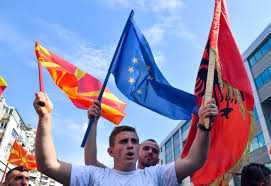 Today, the EU Member States will have to decide if they approve of the proposed negotiations framework for the accession of North Macedonia and Albania. The topic will be on the agenda of today’s meeting of the General Affairs Council to be held online.

It is expected that Bulgaria will veto the proposed framework.

Although yesterday the diplomatic sources claimed that there is still a chance that the negotiation framework for North Macedonia and Albania will be approved before end year, no breakthrough is expected as regards the Bulgarian position, the Bulgarian National Radio reports.

As is known, Bulgaria insists that the issues concerning the countries’ common history and language should be resolved before Bulgaria greenlights the start of the accession talks.

The European diplomats, on their part, insist on convening the intergovernmental conference as soon as possible adding that there are no obstacles to the approval of the negotiation framework for Albania. They stress that one way or another the decisions cannot be taken at this meeting because it is held in video format.

Along with that the specific recommendations for the five first Member States in alphabetical order will be announced today, among them those concerning Bulgaria and the new rule of law mechanism.