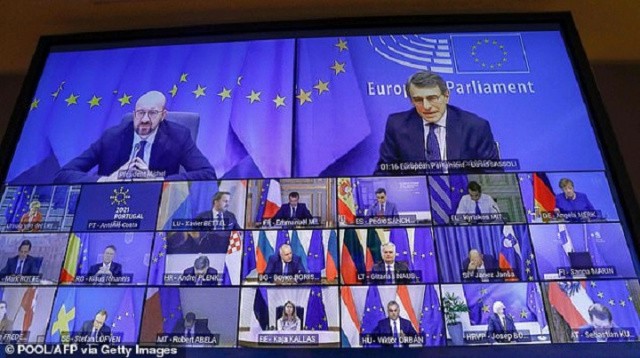 EU leaders have agreed to introduce vaccine passports by the summer in a boost to Britons planning holidays on Europe’s beaches.

Having suffered its deepest recession to date and still floundering on the rollout of its vaccination programme, German Chancellor Angela Merkel said that ‘everyone agreed that we need a digital vaccination certificate’ programme during a virtual summit.

But Merkel admitted technical work on the vaccine ‘passports’ by the EU Commission would take three months to complete, meaning it would not be ready when Britain could start easing international travel restrictions in May.

It comes following pressure from southern European countries to have schemes in place to help safely kickstart their tourism-dependent economies.

Greece officials plan to have the country open by May, and want a scheme that will allow entry to people who have received both doses of an approved Covid vaccine.

The country’s government is reportedly considering plans to open its borders to vaccinated Brits that month, which could put it in conflict with EU plans on foreign travel.

Spain has also been pushing for an EU-wide passport policy as the country is desperate to kickstart tourism. Its foreign secretary proposed that ‘vaccine certificate holders could be exempt from taking a test’.

Austria has also called for an EU-wide ‘green passport’ which would allow people to go on holiday and ‘enjoy gastronomy, culture, events and other things again’.

The move has face resistance from

countries – including France and Belgium – who are concerned that easing travel for people who have been inoculated would discriminate against others.

But their claims come as the EU vaccination scheme continues to stumble with just 6.2 vaccine doses per 100 people being given out versus 27 doses per 100 in the UK.

French scientists also say the country faces a new wave of severe cases in April and May – at the same time the UK expects to ease its restrictions after all over-50s have been vaccinated.

Although infection rates are heading down in about 20 EU member states, there are concerns about a third wave of coronavirus because of the variant first detected in Britain spreading rapidly in some countries.

EU Commission President Ursula von der Leyen warned that the British variant was present in 26 of the EU’s 27 countries, the South African variant in 14 and the Brazilian in seven.

‘There is growing COVID fatigue among our citizens,’ she said. ‘But we should not let up now. Not only does the situation remain serious in many parts of Europe but we must also watch for the new variants that are spreading.’

One EU official gave a blunt assessment of the risks of opening up in the next few months – saying that the bloc wants to avoid ‘a new death season’.

Yesterday the EU said it was on track to hit its target of vaccinating 70 percent of adults by the end of the summer although progress remains sluggish, while the global coronavirus death toll topped 2.5 million.

The milestone came as a new study showed Pfizer’s Covid jab to be 94 percent effective, raising hopes for mass immunisation campaigns to help end the pandemic.

The World Health Organization (WHO), meanwhile, urged governments to try to better understand the long-term consequences of coronavirus on some sufferers, calling the impact of prolonged symptoms a ‘significant’ burden.

After a video summit of EU leaders focused on the bloc’s vaccination roll-out against Covid-19, European Commission chief Ursula von der Leyen said fully vaccinating just under three-quarters of adults by late summer was a ‘goal that we’re confident with’.

But EU leaders warned that tight travel restrictions must remain as the bloc stepped up ‘efforts to accelerate the provision of vaccines’, although it would take months, not weeks, to build enough vaccine supplies.