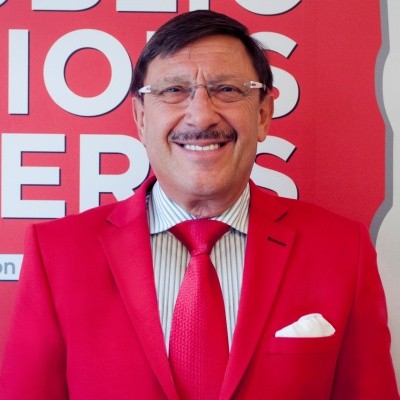 Maxim Behar was congratulated by 50 business leaders from 25 countries, 5 continents for his recognition as Best PR Professional in Europe for 2022. The award was presented by the most prominent media outlet about public communications in the world PRWeek. Behar was selected as a winner by proven experts from the industry globally.

Maxim Behar was surprised with a congratulatory video gathering some of the most prominent communications professionals and business leaders worldwide – colleagues, partners, clients, and friends. Maxim Behar is a CEO of the leading PR company M3 Communications Group, Inc., and President of the World Communications Forum Association in Davos, Switzerland. He is also past President and current Chair on International Growth of the World’s PR organization ICCO.

The full video can be watched here: https://www.youtube.com/watch?v=HldBR2cOOs4

Among the leaders who greeted Maxim Behar are (in order of the video appearance):

Maxim Behar is recognized the Best PR Professional in Europe for the second time. The first award was presented to him during a special online ceremony in 2020.

Apart from being an experienced international PR expert and former President of the most influential PR organization in the world ICCO, Maxim Behar is the current International Growth Chair of the organization. He was also elected Advisory Board Member of one of the most influential European universities ENGAGE.EU. Behar is also the author of one of the best PR books at the moment – “The Global PR Revolution”. Initially published in the USA, the book achieved an incredible success and in the period of 2 weeks it was the best-selling read on Amazon in the categories Public Relations, Sales Marketing and Career Advice. Maxim Behar is the only Bulgarian to be inducted in the ICCO PR Wall of Fame.

Maxim Behar is a globally renowned PR expert, entrepreneur, journalist, diplomat, and Harvard Kennedy School graduate. He is the founder and CEO of the Bulgarian leading PR company M3 Communication Group, Inc., partner of one of the world’s largest PR corporation Hill+Knowlton Strategies. Maxim is a former ICCO President, currently serving as ICCO International Growth Chair. He was appointed as International Fellow of PRCA, President of the World Communications Forum Association in Davos, Switzerland, and Advisory Board Member of one of the most influential European universities ENGAGE.EU. He has been inducted into the Global PR Hall of Fame in London and awarded many titles, among them Best PR Professional in Europe for 2020 and 2022 by PR Week, Global CEO of the Year by The International Stevie Awards, and Communicator of the Decade by the Indian Association of Business Communications. His book The Global PR Revolution was ranked among the Top 10 Best PR Books of All Time by Book Authority and also made a bestselling record among new PR books on Amazon. Bulgarian born he considers himself a global citizen.