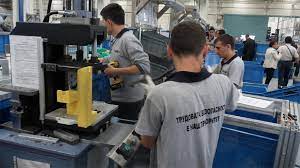 In August, production prices in Bulgaria rise for the second consecutive month as their growth accelerates and on an annual basis, according to data from the National Statistical Institute, which is a prerequisite for a certain increase in inflationary pressure in the country.

The general producer price index in Bulgaria (PPI index) increased in August by 0.3% compared to July, when it increased by 1.3%. Higher prices were registered in the production and distribution of electricity – a jump of 2.2% and in the extractive industry – by 1.0%, while in the manufacturing industry a price decrease of 0.3% was reported.

On a year-on-year basis, the country’s overall producer price index rose by 3.5% in August after rising 3.0% in July, and after only a 0.9% increase in June (the slightest rise in the manufacturer since November 2016).

The prices in the production and distribution of electricity, heat and gas registered a more significant increase of 11.8% compared to a year earlier, while in the mining and quarrying industry they increased by 5.4% and the manufacturing industry by 1.0% .

The producer price index on the domestic market in Bulgaria in August alone increased by 0.7% on a monthly basis and by 4.5% on an annual basis (compared to August 2018).

On the other hand, the producer price index on the international market decreased by 0.3% on a monthly basis and increased by 2.0% compared to August 2018.

Earlier this month, the NSI released a report reporting monthly consumer inflation in August of 0.1% and an increase of 2.9 percent from a year earlier for the second consecutive month.

Today’s production price data is a prerequisite for some increase in consumer inflation in the coming months.