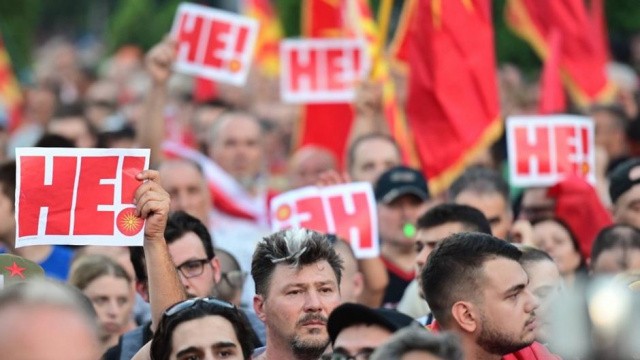 Offensive and vulgar chants against the European Union and Bulgaria were heard last night during the second protest in front of the Macedonian government building against the French proposal to start negotiations for the Republic of North Macedonia for EU membership.

“Bulgarian fascism is a European value”, “EU, f*** your mother”, “Lice”, “Tatars”, “Bulgarian fascists”, “Europe supports supremacy”. These were just some of the posters. The Vergina Sun flag was also waved en masse at the protest. All the speakers called for the rejection of the French proposal, but all the time they shouted against Bulgaria.

According to Darko Janevski, “the French proposal, if accepted, could destroy Macedonia forever”. “The great Zaev and his love Borissov from Bulgaria signed an agreenment, which will now be monitored by the EU if it is properly implemented…Samuel, Saints Cyril and Methodius, as well as Saints Clement and Naum have already been sold to the Bulgarians, only Gotse and Dame remained” said Janevski and emphasized that “for 30 years he fought so that it would not come to this”.

The representative of the “Macedonian Manifesto” at the very beginning called on those present for a moment of silence for the “victims of Bulgarian fascism in Macedonia“. He then made vulgar accusations against Europe, which he called a “b***h“. He called for traitors like “Kovachevski and Pendarovski to be sent to Sofia or to Macron.”

“For years, Bulgaria mistreated and terrorized Macedonia because we do not accept to be what they want. In the name of European values, they want us to become their colony. If we accept the proposal, we will again be under their occupation, not under their administration as they claim for the period from 1941 to 1945,” said Dragan Milosavljevic. According to him, it is about “brutal Bulgarian assimilation”.

All speakers from the tribune emphasized that “Macedonian identity, language, nation and history are threatened by the latest French proposal“. At the end of the protest, tents were set up in front of the Macedonian government building. A new protest is scheduled for today.