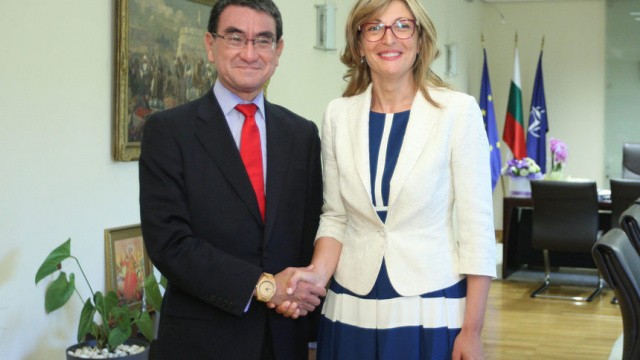 Japan does not currently have a specific answer to Bulgaria’s idea of ​​producing Japanese cars. June Saito, the spokesman for the first diplomat of the Asian country, said at a media briefing.

“It depends on the decision of the Japanese carmakers,” Saito said after the meeting of Japanese Foreign Minister Taro Kono with his Bulgarian counterpart, Ekaterina Zaharieva. “The government can spread the information and pass on your minister’s message to the producers.” According to him, Zaharieva is right that Bulgaria has shown its capacity to attract parts manufacturers.

“There are quite a few competitors in the region,” the spokesman said in response to a journalist’s question. Therefore, “it will be very important for the Bulgarian side to share more information with Japanese manufacturers” during the investment seminars. However, for the time being, “we have no specific answer”, but both parties must work on it, Saito explained.

According to Saito, the meetings went “very well” – both with Zaharieva and with Prime Minister Boyko Borisov have lasted longer than planned. The topics between Kono and his Bulgarian counterpart concerned both bilateral (eg economic) and regional issues related to support for the Western Balkans on their path to EU membership.

The mentioned was the Western Balkans Cooperation Initiative, a project that should complement the Berlin process with economic support and exchange of experience and expertise with small and medium-sized enterprises. Bulgaria is already among the donors in the program and Tokyo is also happy to share experience in providing assistance to developing countries.

Apart from Bulgaria (the arrival is partly due to a promise since the two foreign ministers agreed to exchange visits last year) stops in the four-day tour are Slovenia (which Japan’s first diplomat has never visited), Croatia (important for next year’s EU presidency) ) and Serbia (where, because of the interest of Japanese companies, “we will require good investment conditions”).

In another Western Balkan country – Northern Macedonia – a seminar in September, co-organized by the UNWE’s JICA, will take place. In Skopje, Sofia and Tokyo representatives will share their experience in small and medium-sized enterprises, Saito added.

Asked which other sectors Japan is interested in, Saito explained that in addition to information technology, the food industry (a recent investment in the production of frozen sushi) is also of interest. Trade potential also exists in the wine industry, such as the ability to export against the background of a trade agreement between Japan and the EU.

According to BNB data for 2018, Japan’s FDI in Bulgaria is EUR 55.9 million, and Bulgaria’s in Japan – EUR 3.7 million. A total of 36 Japanese companies operate in Bulgaria according to the embassy in Sofia.

Kono’s visit to Bulgaria coincides with the moment of three anniversaries – 110 from the first bilateral contacts, 80 from the establishment of diplomatic relations, and 60 from their restoration.