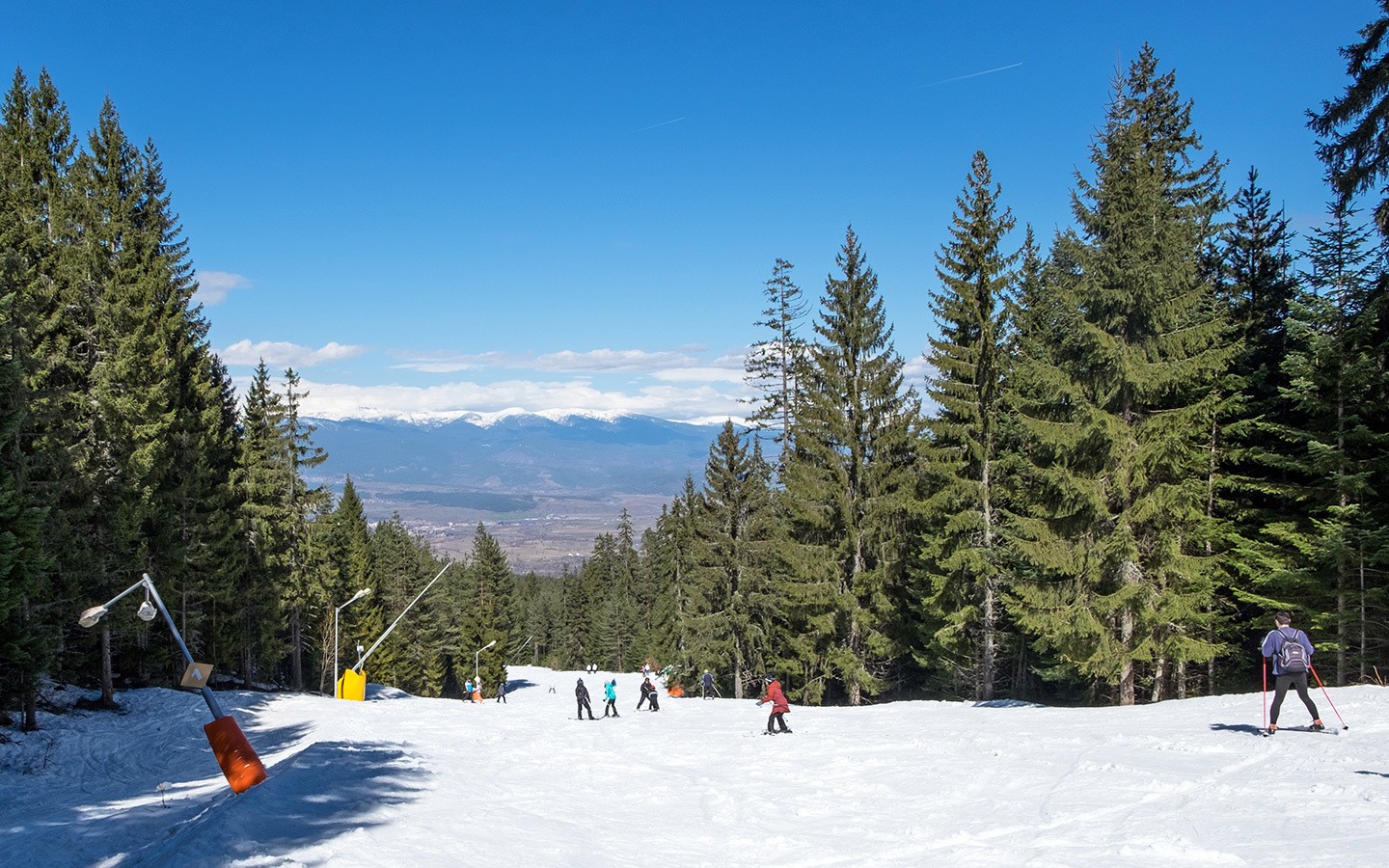 The business expects a strong winter tourist season, commented in an interview with BTA the director of the Institute for Analysis and Evaluation in Tourism Rumen Draganov. With 680,000 foreign tourists visiting Bulgaria from the end of December last year to the beginning of March 2021, their number is expected to double this winter. In 2019, in this period, foreign tourists were 1.65 million.

The expert’s forecasts are based on the overall increase in visits by foreigners observed in the summer.

The Executive Director of the National Board of Tourism / NBT / Polina Karastoyanova commented for BTA that NBT data from our leading winter resorts “Pamporovo”, Bansko and “Borovets”, as well as from the interior of the country, where there are conditions for mountain sports, as well as for spa vacations, show full readiness to offer conditions for vacations, with natural snow, in most parts of Bulgaria. The tracks have already been processed and prepared, Karastoyanova added. Our expectations are moderately positive and optimistic because the business has done what is necessary and has all the prerequisites for the season to be safe, calm, safe for tourists, said the executive director of the NBT.

Yesterday, the Minister of Tourism Hristo Prodanov during the opening of the winter season 2021/2022 in Pamporovo said he was optimistic about the upcoming winter season. There are two main criteria for success – the first is to have a lot of snow, and the second – to have a lot of tourists, he added. The executive director of Pamporovo AD Marian Belyakov also expressed hopes for the current winter season, as for the first time in years there is so much snow in December. Earlier this month, caretaker Tourism Minister Stella Baltova said the expectations were for a challenging but positive winter tourist season and announced that all guidelines for accommodation and catering establishments had been written in line with the Ministry of Health.

This winter we expect the charter flights related to winter tourism to start – primarily from Great Britain, Central Europe and Russia, regardless of the pandemic situation, Draganov added. He also stressed that our winter resorts are ready to receive guests.

In Bansko, the winter season 2021/2022 officially opens today, according to a statement of “Yulen” AD, made in November, and in early December, “Borovets” announced that the ski area in the period 18-26 December will operate at last year’s prices. Vitosha Ski has not yet announced the prices for the 2021/2021 season.

At Christmas and New Year, about 500,000 Bulgarians are expected to celebrate the holidays in the country, including in our winter resorts, said Rumen Draganov. Guest houses, small family hotels, accommodation with spa, spa and wellness services will be preferred, as they were booked at the end of November, the expert said. According to the results of a representative survey in October on the attitudes of Bulgarians towards the upcoming winter season and their intention to vacation, 730,000 adult Bulgarians have stated that they plan at least one tourist trip or vacation in the upcoming winter season 2021/22.

What is new for this winter season is that the industry is returning to normal competition, Draganov commented. The winter resorts in France, Austria, and Andorra did not work last winter, but now they are open, which is good because there is a lot more advertising of winter tourism, the expert said. Bulgarian tourism works better in conditions of competition and our tourist product as a competitive price is much better, said Draganov and added that resorts such as “Borovets” and Bansko are considered one of the most profitable for skiing, and “Pamporovo” is convenient for children and beginner skiers.

And again on electricity prices

Electricity prices are high throughout Europe and even somewhere higher than ours, Draganov commented and added that the prices of tourism services have been updated everywhere this winter. In some cases, lift passes in our country are almost twice as expensive as last winter, but according to the expert, the price will not be a stopping factor when choosing a winter holiday destination, because skiing is generally expensive and people who like to practitioners, regardless of price, will continue to enjoy them.

In the Agreement for joint management of Bulgaria, until 2025, signed by the coalition partners, in the part “Tourism” was not discussed a proposal for the possible construction of new ski slopes in Bulgaria, Draganov commented. Such a document is missing because some of the participants in the meetings and those who became advisers to the line minister claim that there is no snow and no skiing in Bulgaria. That is why they do not expect business development on this topic, Draganov added.

The Executive Director of NBT Polina Karastoyanova stressed that the country needs a new post-strategy strategy for tourism development with the participation of international experts, where to anticipate the development of individual components of tourism in Bulgaria, including winter. In this part, it is necessary to attract experts from Austria, Germany, Switzerland, who have already created models leading to economic results. It is criminal for Bulgarian society to make our mountains inaccessible, Karastoyanova said, adding that this counterproductive process must be stopped.

In the short term, Karastoyanova highlighted the need to support the tourism industry in terms of green certificates and vaccination. The NBT insists that the green certificate be introduced for all Bulgarian citizens and for all public services and activities. This can be done with a positive communication campaign for vaccination, with the introduction of incentives in the form of vouchers for various tourist services, reminded the idea of ​​Borda Karastoyanova and pointed out that these proposals were not implemented by line ministers and we missed the opportunity to build health shield of the population. The NBT said it was ready for such a partnership with the new ministers.

Among the areas in the Agreement that are consensus on the tourism business, Rumen Draganov pointed out the green policies related to the circular economy, and the idea that most of the local production of meat, milk and dairy products, fruits, and vegetables go to tourism, and the topic for sustainable tourism, linked to the traditions and customs that will develop in remote areas, small towns where other types of business can not make a living. The second consensus area for business is digitalization – in the recording and cancellation of trips, processing of electronic visas, as well as the qualification and retraining of staff to improve their digital skills. The business also shares the views set out in the coalition agreement on infrastructure development – transport links, rail infrastructure, river and sea cruise ships, and institutional cooperation on tourism. Regarding the concessions on the beaches, Draganov commented that at first the most important task of the state was related to mapping the beaches. The Ministry of Tourism has not done this in previous years and that is why there is trampling of dunes in protected areas, the expert said. According to him, another important commitment is to create a normative definition of what is a movable object, because “we cannot consider some giant constructions at sea as a movable object, because they were set at 14-15 steps.”

For the National Board of Tourism, the coalition document in the “Tourism” section is a starting plan, Karastoyanova said. The approach should be different when the government is a fact and we are talking about the most affected sector, such as tourism, which needs a modern vision, the creation of which should be discussed between business and the state. The strategy should have a short-term part – 2022-2027, and a long-term part, which will be for ten years. The individual components of tourism should be included there, Karastoyanova added.

The government on tourism

Creating a unified marketing concept with a unified brand “Bulgaria”, in coordination between the Ministry of Tourism and Business for its implementation. This is one of the priorities set out in the “Tourism” section of the Agreement on Joint Governance of Bulgaria until 2025, signed by the coalition partners.

The new government agreed to establish five strategic departments within the Ministry of Tourism – Maritime; wellness and spa; cultural and other; conference; mountain and adventure. Each department will have its own marketing resources and a commission chaired by the Minister of Tourism.

A single web platform with a mobile application will be developed, from which tourists should get a “complete picture” of tourism opportunities in a given area – from accommodation and dining, through tourist programs, attractions, and adventures, to the local menu specifically offered in the area.

Short-term measures to support the industry

The coalition partners agreed to work on the creation of a guarantee fund in tourism, which would protect the sector in times of crisis and be aimed at tour operators engaged in outbound tourism. Energy subsidies will be provided in connection with the price of electricity, tourism will be included for partial or full lending to support the activities of the Bulgarian Development Bank, and VAT will remain at 9 percent until the end of the covid crisis, the coalition agreed. partners. Another short-term measure in support of the industry is to return the 60/40 scheme to the old version – with a proven decline of 20 percent, instead of 30-40 percent, as it is now. To have free quick tests for clients of hotels and restaurants that do not have a green certificate, to be able to temporarily freeze the activities of non-operating tour operators and others for a period of one year, to analyze and revise the voucher program are among the other consensus proposals in the agreement. Part of the short-term measures is an analysis of the aid for the self-insured affected by the crisis – guides and mountain guides.

Among the longer-term topics that the new government will work on are: the creation of the 2nd level of categorization of resorts by function and type, the stimulation of defining resort areas in settlements in order to promote local business. We will also work on the prospect of the different forms of the tourist tax, and the proceeds from it to be spent specifically for the infrastructure of the resort area. It is also proposed to standardize the bed capacity according to the resources of the resort, as well as to eliminate the concept of Bulgarian beaches and ski areas to be leased.

A Strategy for the development and increase of the share of camping tourism in Bulgaria will be adopted, envisaging regulation and control of wild camping on the Black Sea coast and near mountain dams in a way that will not repel Bulgarian tourists. The facilitation of the issuance of online visas and visa centers, as well as the settlement of the status of national resorts, are also in the focus of the new administration in the “Tourism” section.