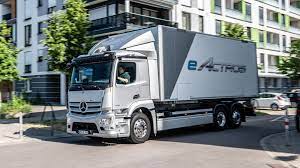 Total cost of purchasing and maintaining electric trucks in Europe will be lower by 2025, and hydrogen-powered fuel cell trucks by 2030, than using traditional diesel-fuelled vehicles, according to the latest analysis by Cambridge Econometrics, using numbers for Italy, Poland and Spain. This can contribute to both achieving climate targets for the sector and creating energy independence from Russian fossil fuels. Infrastructure developments will be needed for making the transition.

In a series of three studies on Italy, Poland and Spain, research consultancy Cambridge Econometrics has recently analysed how full carbon-free operation could be achieved in freight transport – a sector that accounts for nearly 7% of global CO2 emissions. The European Commission’s latest REPowerEU package, which, in view of Russia’s invasion of Ukraine, aims to make Europe independent of Russian fossil fuels well before 2030, adds further relevance to the research topic. Part of the transition to net zero in freight transport could include reducing the dependence on oil by replacing diesel trucks.

Commissioned by the European Climate Foundation, the analysis examined the possibilities of technological implementation necessary to achieve the climate goals based on modelling the truck fleets of Italy, Poland and Spain, with several of the findings also applying to Central and Eastern Europe, where Cambridge Econometrics also has an office, in Budapest.

To achieve environmental targets set by the EU, manufacturers should reduce CO2 emissions from new trucks by 15% by 2025 compared to 2019-2020 levels and by 30% by 2030. The EU targets apply to new vehicles only, suggesting that fleet-level emissions will be decreasing more slowly, as used lorries will still be used in fleets after that date. This is expected especially in Central and Eastern European countries where proportion of used trucks is generally higher in fleets.

According to Cambridge Econometrics modelling, because of this fleet effect, total emissions in the sector would only decrease by 28% in Poland and by 31% in Italy and Spain by 2050, if the emission reduction targets of 15% and 30% are followed. Moreover, even if the sale of new non-zero trucks were completely banned from 2040, the sector would still not function carbon-free in 2050: emissions would remain around a fifth of 2021 levels in Eastern Countries, and around 6 percent of the current CO2 emissions would still be released on Italian and Spanish roads compared to the target net zero levels.

“Necessary emission reduction targets can be achieved in several ways: by increasing the efficiency of existing diesel vehicles, by increasing the share of biofuel and by spreading zero-emission vehicles,” said Dóra Fazekas, director of Cambridge Econometrics’ Budapest office. Electric and hydrogen-powered trucks are more efficient; they have lower energy requirements. However, for them to spread, it is also essential to build the right infrastructure, which is different for each technology.”

According to the proposals, for fully electric trucks (battery electric vehicles – BEV), chargers must be built at logistics centres and depots, and fast chargers along main roads. While charging generally takes longer than refuelling, with adequate sizes of batteries charging can be linked to the mandatory resting intervals of drivers. Electric trucks equipped with pantographs (BEV-ERS) have smaller batteries than BEVs, but, like the railway, they are connected to the overhead power line with a pantograph, and they can charge on the fly. Of course, this requires major infrastructure developments – an example is an electric motorway section currently being tested near Frankfurt.

For spreading the use of fuel-cell vehicles (FCEV), building a network of charging stations will be key, as is the case with battery electric trucks. Hydrogen could be produced locally at the charging stations, using electrolysis, or be transported there via wire or fuel trucks from a central production unit.

Cambridge Econometrics’ study also points out that the total cost of ownership (TCO) – including purchase, maintenance and operation – of electric trucks and vans will be lower than that of internal combustion engine trucks by 2025, or within three years only. While their purchase price may remain higher, better efficiency and lower fuel prices and service costs will make zero-emission trucks cheaper to use than traditional vehicles.

The cost of hydrogen production is expected to fall drastically in coming years due to a spread in their use, making fuel cell heavy goods vehicles cheaper to own and operate than internal combustion trucks by 2030. In addition, the cost of fuel for diesel vehicles in Europe may be further increased if the current tax advantages in several countries are abolished. Under the EU’s new “Eurovignette” directive, tolls on European roads will also depend on vehicle emissions, which will further increase the cost of operating internal combustion trucks. The cost of fossil fuels is also expected to rise if the European emissions trading system (EU-ETS) will be extended to transport and buildings in 2025.