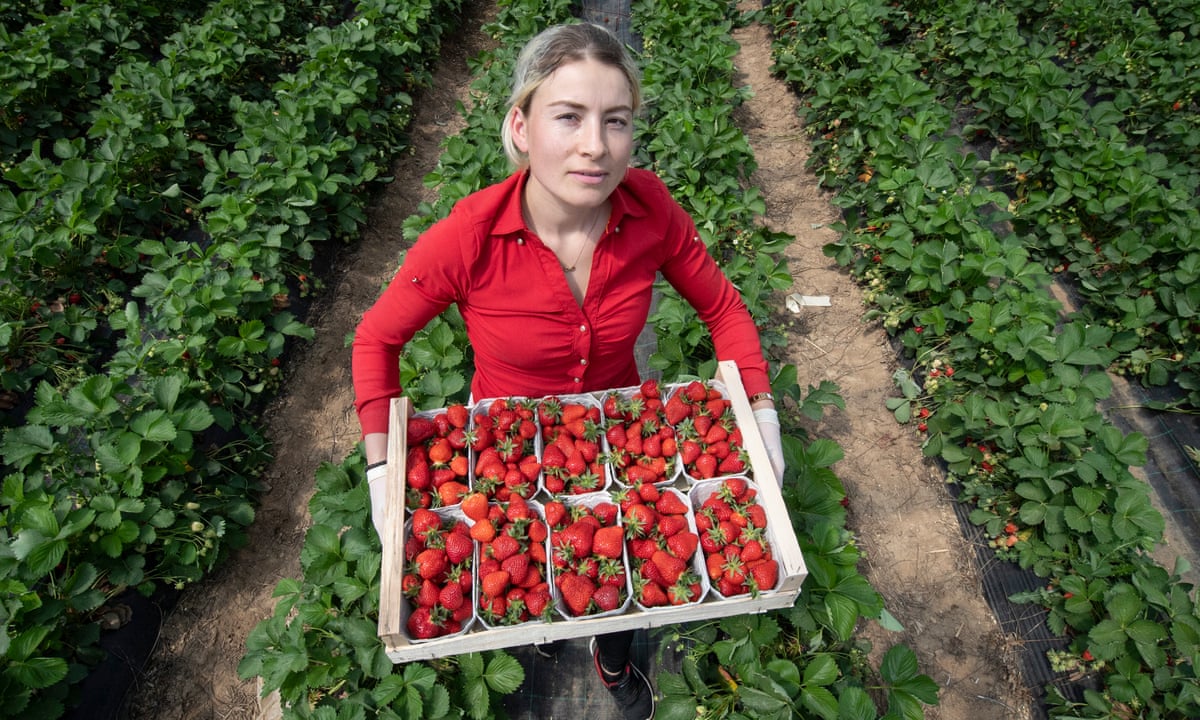 Under the headline “All my friends went home,” the British newspaper Guardian published an article about the post-Brexit life of a Bulgarian woman in Britain who picks strawberries on a farm that no longer has EU workers.

The job of a woman named Eleanor Popa, who according to the British edition is from Bulgaria, has become even more difficult as her European colleagues leave the United Kingdom, but British workers do not take their place. The author tries to find an answer to the question:

And tells the story of the Bulgarian woman.

Eleanor Popa sleeps in a six-bed caravan at Sharington Strawberries, a 16-acre strawberry farm in Melton Constable, Norfolk. There are now only four people in her caravan because everyone else has gone to work in other EU countries.

“My friends,” she says, “went home or went to work in Spain and Germany. Many of them did not return to work this year.”

The woman has been picking strawberries here for two years.

It is explained that the Bulgarian woman, who should work eight hours a day, now, due to the shortage of labor on the farm, often works nearly ten hours a day. The woman has two children, a boy, and a girl, whom she misses very much. But she left them because “the money here is good.” This is a lonely and often boring existence, the author says of the worker. In the evening, workers play cards or watch TV in their caravans. Sometimes they go to the beach, she added.

Popa’s boss, 64-year-old Simon Turner, is running out of energy.

“It’s awful,” he admits. “Brexit killed us. It will destroy us. My business survived covid, but I don’t think we will overcome Brexit.” Turner works 20 hours a day. “I’ve run this farm for 40 years,” he said, adding: “This is the worst thing that has ever happened. To invest your life in building something out of nothing, and to have it destroyed by something beyond your control, is unbearable,” Turner said.

The problem is that he cannot hire British workers and EU citizens cannot enter the country. The pay is decent. Popa says she earns between 2,000 and 2,500 British pounds a month, after taxes, depending on how many strawberries she manages to pick.

“But it’s hard, exhausting work and the British workers don’t want to do it. It’s too difficult,” Turner said.

Last year, he recruited 88 British officials as part of a government-backed Pick for Britain campaign.

“Most of them didn’t last three hours,” said the farmer. “Imagine how many documents this is to put 88 people on the payroll. Only two people stayed for more than a few days,” he said.

Turner desperately wants the government to allow EU workers to re-enter the UK.

The picture is similar throughout the country. The author quotes Tom Bradshaw, vice president of the National Farmers’ Union, as saying that agricultural enterprises have done their best to hire staff in the country, but even competitive wages are less important because the labor market is so limited, that instead of being solved, the problem only increases production costs.

The National Farmers’ Union is calling for short-term visas to restore the market after covid, along with introducing a scheme for permanent seasonal workers. According to Bradshaw, this would be an effective and vital way to support the pressing needs of the industry today.

If the government does not allow these temporary visas for EU agricultural workers, Simon Turner plans to close his farm. Next year maybe the last for his business. Turner desperately wants the government to allow EU workers to re-enter the UK.

“These are good people and we pay them fairly, but Brexit has made things so difficult that these people don’t want to come,” Turner said.

This year will probably be the last for the Bulgarian Popa in the United Kingdom.

“I will miss Britain,” she said. “It’s a nice country. People are nice.”

But all her friends have gone to Spain or Germany to pick fruit, so she will probably join them next year.

“It’s easier to travel there,” she said. “The documentation is easier and the money is almost the same. And it’s also closer to Bulgaria,” she said.