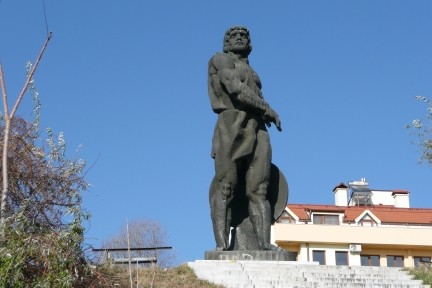 While the stories of the powerful men of the Roman Empire are well-known, it is the name of a former slave that is arguably one of the most recognizable from that period. Outside of Julius Caesar, you could certainly make a case that Spartacus is the person who boasts the biggest legacy from the times of the Roman Empire.

“I’m Spartacus” is one of the most quotable lines in movie history, but who actually was Spartacus? His journey from soldier to slave to gladiator might be well-documented, but his Bulgarian origin may be less appreciated across the world. That’s not to say it is ignored by all; Donald Tusk, the European Council President, acknowledged the Bulgarian people as “the descendants of Spartacus” in a speech he gave at the opening ceremony of the Bulgarian EU Presidency in 2018.

Given his achievements in life, being the descendants of Spartacus is something to celebrate. Here’s a look at what we know about Spartacus, and how the world engages with the legacy of this Bulgarian warrior today.

A brief history of Spartacus

Much of Spartacus’ story is lacking in detail, but the overarching narrative paints the picture of a formidable warrior with a strong moral compass. Spartacus is believed to have been born around 111 BC in the region then known as Thrace, which is now shared between parts of Bulgaria, Turkey, and Greece. The northern area of Thrace is today’s southeastern Bulgaria, which is where Spartacus’ story starts.

Spartacus was supposedly born not far from the banks of the Struma River, with his hometown Sklave situated in the Sandanski municipality. Sklave was also a place of great tragedy for him. He deserted from the Roman Army and seemingly returned home to Sklave, where he was then enslaved and sold. Spartacus’ history as a talented Roman soldier saw him converted into a gladiator and forced to fight for others’ entertainment. However, he masterminded an escape and led around 70 other slaves to safety.

He soon rallied a rebel force a thousand times bigger than his original band of escapees, while his military expertise helped this army of slaves and peasants to strike blows against the Roman Empire. Marcus Licinius Crassus, Rome’s richest man, was tasked with taking legions of soldiers to quash this uprising. Crassus completed this mission in Senerchia, located in modern-day Italy, where hopes of rebellion fell with Spartacus during the battle.

A legacy in Bulgaria and beyond

It is unclear what Spartacus wanted before Crassus’ legions ended his life. Perhaps he had aspirations of marching on Rome, or he simply wanted to take his band of former slaves away from the clutches of the empire. Although his death stopped him from fulfilling his ambitions, his name has stood the test of time spectacularly. Whether because of his military prowess or his bravery in taking on an empire, Spartacus has commanded an incredible legacy in Bulgaria and beyond.

The story of Spartacus has unsurprisingly been retold and embellished in popular media. The most notable cinematic example is undoubtedly Stanley Kubrick’s 1960 film Spartacus, a 197-minute epic that won four Oscars and gave us the iconic “I am Spartacus” scene. Starz further explored the life of this famous Thracian in its Spartacus television series which ran for three seasons. The show had a glittering cast including John Hannah and Lucy Lawless, while Bulgarian actor Raicho Vasilev appeared as Gnaeus the gladiator in two seasons.

Elsewhere in the world of entertainment, Spartacus has the starring role in a trilogy of online slots. 888casino a popular online gaming site with a no deposit free spins offer, allowing customers to use 50 free spins on the Spartacus slot that recreates the gladiatorial part of his life. Call to Arms and Legendary Warrior extend Spartacus’ story even further in an online slot format. Ensemble Studios’ Age of Empires: Rise of Rome places a different spin on honoring Spartacus. Rather than aiding the rebellion, players are tasked with overcoming Spartacus’ uprising as part of the Enemies of Rome expansion pack.

Those examples from the entertainment industry reflect how the story of Spartacus has spread across the world, but there are plenty of tributes to his life in what would have been his home country. A statue of Spartacus stands in the town of Sandanski, the capital of the municipality where his birthplace resides, with people traveling for miles to see the gladiator cast in bronze. Spartacus’ legacy can also be seen in the names of soccer clubs in Bulgaria; Spartak Varna, Spartak Pleven, and Spartak Plovdiv all owe their names to this man of Thrace.

There is so much that cannot ever be known about Spartacus, which makes it all the more remarkable that his name is instantly recognizable across the world. What is known about him, from his freeing of fellow slaves to his outwitting of the Roman Empire, has certainly resonated with people from Bulgaria and beyond.