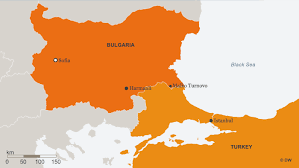 The two countries are emerging from difficult times caused by the contraction of trade due to the pandemic, Batur said. “Close co-operation between Bulgaria and Turkey needs to be further improved during the recovery period, because our good relations have a positive impact on trade”.

He stressed that maintaining a positive dialogue is crucial in difficult times.

For her part, Bulgarian Deputy Economy Minister Yana Topalova stressed that Turkey continued to be one of Bulgaria’s distinguished strategic partners.

Topalova said the pandemic had a negative impact on bilateral trade between Turkey and Bulgaria, which fell 11% year-on-year in the first nine months of 2020.

Noting that Turkey is among the top 10 investing countries in Bulgaria, Topalova said that Turkey’s foreign direct investment in the country was about 1 billion euros (USD 1.18 billion) as of June 1, noting that “Turkey has invested more of 20 million euro in Bulgaria despite the pandemic”.

Topalova said the government is constructing new industrial parks to create new opportunities for investors, adding that “we need to work together to eliminate the economic impact of the pandemic and find new ways to work together”.

Nail Olpak, president of DEIK, said commercial data showed there was still much room for improvement.

“Apart from our friendship, the Turkish and Bulgarian business sectors, which have been lovingly engaged for years, will move forward with all courage to further strengthen our trade and investment relations and cooperation”, Olpak said.

Zeki Saribekir, chairman of the Turkey-Bulgaria Business Council, stressed that Turkey and Bulgaria are two complementary countries despite their differences.

Stressing that co-operation between the two countries will ensure a strong presence of Turkey and Bulgaria in the new order, Saribekir said: “Although world trade is currently shrinking, we can quickly improve our activities through co-operation”.

Saribekir stressed that the goal of the countries is to find issues that will benefit both sides on the principle of win-win.

Boyko Takov, executive director of the Bulgarian SMEs Promotion Agency (BSMEPA), also said the foundation is working with partners around the world to improve relations between companies from the two countries.