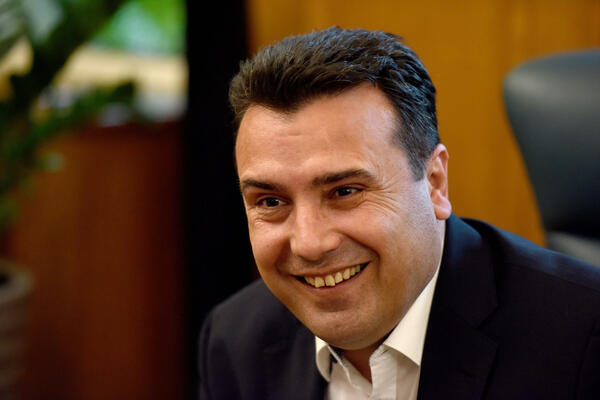 Zoran Zaev, Prime Minister of North Macedonia and leader of the Social Democratic Union of Macedonia party (SDSM) is currently under pressure. His fellow party member Petre Shilegov, the current mayor of Skopje is facing electoral defeat. He has lost the first round of the Skopje mayoral election to the VMRO-DPMNE support Danela Arsovska.

Following this loss, Zoran Zaev decided to use the nuclear option to help his party mate. To try to exploit some kind of ethnic hatred against Bulgarians and Bulgaria, hoping for the best. According to Zaev, you cannot have Bulgarian citizenship and also be a mayor of Skopje.

In a morning briefing on the 27th October 2021, Zaev stated “I claim that Danela Arsovska is also a citizen of Bulgaria.”

Zaev continued, “This is a very serious matter. She does not deny it. There is no clear denial. The truth will come out to the end. A mayor is elected in Skopje, a mayor is elected in Bulgaria. There was a mayor of Skopje in 1941, but here we are electing a mayor. I claim that Danela Arsovska is also a citizen of Bulgaria. The problem is political, ethical, dishonest. You have to tell your citizens”.

Later Zoran Zaev added, “I expect Arsovska to withdraw immediately if she loves Skopje and the people of Skopje a little. This is humiliation”.

On the same day, two entire press conferences were held by Slavjanka Petrovska of the SDSM party. In which there was a comical big reveal of the fact that Arsovska is apparently a citizen of Bulgaria.

Interestingly, there were no documents in the Bulgarian government database with that ID number. Although it does not mean that Arsovska does not hold Bulgarian citizenship, instead the IDs on the documents shown by SDSM members are not legit.

Above you can see a post on the official SDSM Facebook page, the text in red translates as “I will go out, I will vote!”. While the black and white text translates as “Skopje does NOT need a Bulgarian mayor”.

A promotional billboard featuring Danela Arsovska was also vandalized. With “Petrich” (a Bulgarian city) being plastered over the word “Skopje”.

Not the First Time

This is not the first time that Zoran Zaev has resorted to trying to exploit possible ethnic tensions in order to win an election. In 2013, when he was competing for the position of mayor of Strumica. He accused his opponent of being a Bulgarian due to him owning a hotel and other businesses in the country.

A billboard by Zaev’s 2013 mayoral campaign in Strumica. The billboard says “This is Strumica, this is not Blagoevgrad”. With Strumica of course being a North Macedonian city and Blagoevgrad a Bulgarian city.

All of this is particularly ironic, considering that multiple members of Zoran Zaev’s family are also associated with multiple businesses in Bulgaria. Danela Arsovska has so far denied having Bulgarian citizenship, and she has also stated that she identifies as an ethnic Macedonian.