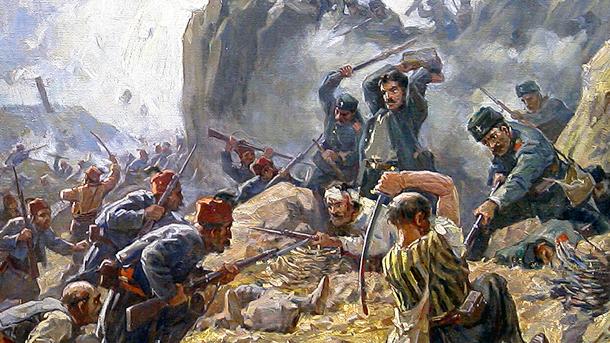 Today we celebrate the 143rd anniversary of the Shipka Epopee. On the occasion of the celebrations at 11:00, the head of state Rumen Radev will climb the steps to the Monument of Freedom on Shipka peak together with the citizens, who will pay tribute to the feat of the Bulgarian volunteers and Russian soldiers. About an hour later, the president will deliver a speech on the occasion of the 143rd anniversary of the Shipka epic.

The defense of the Shipka Pass is one of the most heroic and decisive battles during the Russo-Turkish War of Liberation in 1877-1878. The fights that took place from 09/21 to 13/26 August 1877 between the defenders of the pass and the Turkish Army entered the Bulgarian history under the name of the Shipka Epopee.

The task of the small Russian-Bulgarian detachment under the command of a general Stoletov, consisting of about 7,500 people, is to stop Suleyman Pasha’s supreme army (about 27,000 people and a reserve of 10,000) to prevent them from crossing the Balkan and joining the Turkish groupss in Northeastern Bulgaria to help the besieged Osman Pasha army in Pleven.

The struggles for Shipka began on August 21/21, 1877. For six days, Bulgarians and Russians with fire and bayonet repelled the continuous attacks of the Turkish army. The heaviest and decisive for the defense is the third day – August 11/23, when the Turks are tightening the ring around the defenders, and the ammunition are at an end. In the afternoon, Suleyman Pasha throws all his reserves against the center of defense.

At this most critical moment, when Shipka seemed to fall, from Gabrovo arrived the first backup sent by a general Radetzky. All troops arrive in the evening at 16 shooting battalions and after a fierce battle the Turks retreat. Shipka is saved! The fighting continues for the next three days, but the passage is already firmly in the hands of the Russian army. The defense of Shipka continues in the autumn and winter of 1877. This period goes into history as a “Winter Shimmering Staging”.

Despite the cold and fog, despite the snow storms and blizzards, Shipka’s defenders heroically defend the pass. For those filled with courage and sacrifice, the telegraph communicates with the brief phrase: “Everything is safe at Shipka”. Russian soldiers and Bulgarian volunteers turned the passage into an inaccessible fortress, “a closed door for the Turkish invasion of northern Bulgaria and an open door to the victorious march of the Russian army to Constantinople,” in the words of Gen. Radetzky.

After the fall of Pleven (November 29 / December 10, 1977), the Russian troops crossed the Balkan Mountains in extremely harsh winter conditions and captured the Turkish Army of Ueisel Pasha in the Shenyov Fortified Camp on December 28, 1877. January 9, 1878. Victory at Shipka- Sheinovo is a worthy end to the Shipka epopee. The victims that the Russian regiments and the Bulgarian companies give at Shipka and in the field of Sheinovo are about 11 000, wounded and missing, and over 9 000 people were frozen and sick during the winter. The main stone of the Monument of Freedom was laid on August 26, 1922.

The monument was completed in 1930. On August 26, 1934, the monument of Mount St. Nicholas was solemnly opened by Tsar Boris III. The monument is 31.5 meters high and it has 890 steps. Above the central entrance is proudly a bronze lion – a symbol of the Bulgarian statehood. The other three sides have the names of Shipka, Sheinovo and Stara Zagora – the battlefields reminiscent of the feats of the Bulgarian volunteers.