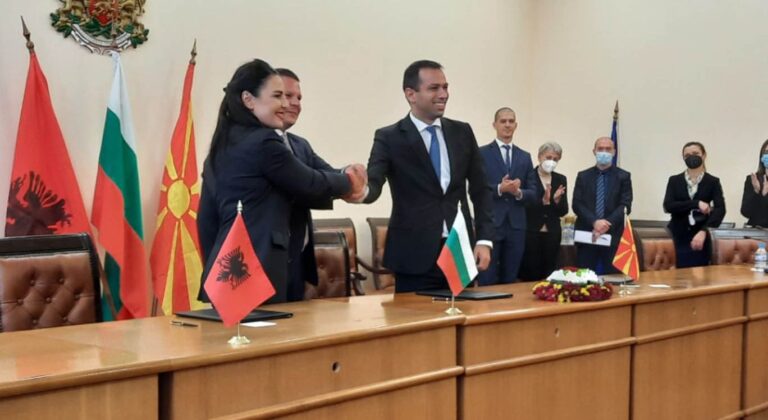 The Ministers of Transport of North Macedonia, Bulgaria, and Albania, Blagoj Bochvarski, Hristo Aleksiev, and Belinda Balaku, today in Sofia, signed a Memorandum of Understanding for the construction of Corridor 8. The document sets clear dates for the development of the three countries and their activities on Corridor 8.

After the signing of the Memorandum, Minister Bochvarski said that Skopje is strongly committed to the construction of infrastructure projects and that in the six-year strategy of the Government, the country promised 2.7 billion euros in its development, MIA reports from Sofia.

Bulgarian Transport Minister Aleksiev also predicts that Corridor 8 will be ready by 2030. He announced that Bulgaria next week will start the tender for construction of the railway section between Pernik and Radomir, and in 2022 the other section from Radomir to Gjueshevo, for which there is already a technical project. According to initial estimates, this part will cost 200m euros. Bulgaria is working together with Northern Macedonia on the border tunnel.

Albania, as Minister of Transport and Energy Balaku said, is working hard on the construction of a road to the border with Northern Macedonia, as well as a special port for Corridor 8.

The three ministers, of Bulgaria, Northern Macedonia and Albania, agreed that Corridor 8 is of strategic importance not only for their economies, but also for better connectivity of the Balkans with Western Europe, the Black Sea and other European partners.