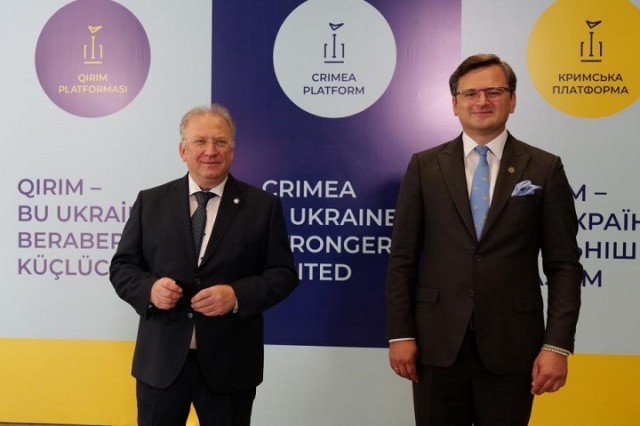 Bulgarian Foreign Minister Svetlan Stoev, who began a three-day visit to Ukraine on Monday, confirmed his country’s consistent support for the sovereignty and territorial integrity of Ukraine within its internationally recognized borders and voiced concern over the increasing militarization in the Black Sea region. The chief Bulgarian diplomat addressed the inaugural session of the International Crimea Platform Summit.

The forum, initiated by Ukraine and backed by the EU, is under the auspices of President Volodymyr Zelenskyy and seeks to focus international attention on the illegal annexation of Crimea and the need to reintegrate the peninsula into Ukraine. The participants in the inaugural session included European Council President Charles Michel, European Commission Executive Vice-President Valdis Dombrovskis, and high-ranking representatives of 46 countries and organizations.

“This forum provides me with an appropriate venue to confirm yet again Bulgaria’s strong and traditional support for the independence, sovereignty, and territorial integrity of Ukraine within its internationally recognized borders,” the Foreign Minister said.

He emphasized that, as an EU Member State and a friend and partner with a historic Bulgarian ethnic community in Ukraine, his country will remain strongly committed to the implementation of the policy of non-recognition of the annexation of Crimea. “Crimea’s de-occupation and the resolution of the conflict in Eastern Ukraine must remain high on the international agenda,” he added.

“As a Black Sea country, we are concerned about the increasing militarization of the region,” Stoev said. In his statement, he also stressed the need to ensure free access to the Ukrainian ports in the Sea of Azov. “The full and comprehensive application of the Minsk agreements is the only way to reach a political settlement of the conflict in and around Ukraine,” he pointed out.

In Kyiv, Foreign Minister Svetlan Stoev conferred with his Ukrainian counterpart Dmytro Kuleba. The two discussed the traditionally good and friendly relations between their countries and the possibilities to deepen them, including within the context of the Bulgarian ethnic community in Ukraine, Stoev’s Ministry reported.

“Bulgaria would be glad to receive shortly an official response to our expectation to open a consular chancery in Bolhrad, which would facilitate the links of our compatriots with Bulgaria,” the guest said. He was referring to the nearly 74,000 Bulgarian residents of the Bolhrad Raion, which is the largest Bulgarian community in Ukraine.
During the conversation, Bulgaria reconfirmed its readiness to donate to Ukraine 50,000 doses of AstraZeneca vaccines against Covid-19 as a token of further support for that country.

So far, as part of its Official Development Assistance alone, Bulgaria has financed projects for Ukraine with more than 850,000 euro. Stoev invited Kuleba to visit Bulgaria, and the two agreed that the two countries’ deputy foreign ministers will hold political consultations ahead of the visit.

Separately, within the framework of the forum, Stoev held brief talks with Foreign Ministers Mevlut Cavusoglu of Turkey (on the situation in Afghanistan), Bujar Osmani of North Macedonia (on continuing the negotiation process at the expert level), and Bogdan Aurescu of Romania (whom he thanked for the help in evacuating Bulgarian nationals from Afghanistan). Brief sessions were also held with Foreign Ministers Alexander Schallenberg of Austria, Simon Coveney of Ireland, and Dorde Radulovic of Montenegro, with Croatian Prime Minister Andrej Plenkovic and Foreign Minister Gordan Grlic Radman, and with Swedish Prime Minister Stefan Lofven and Defence Minister Peter Hultqvist.