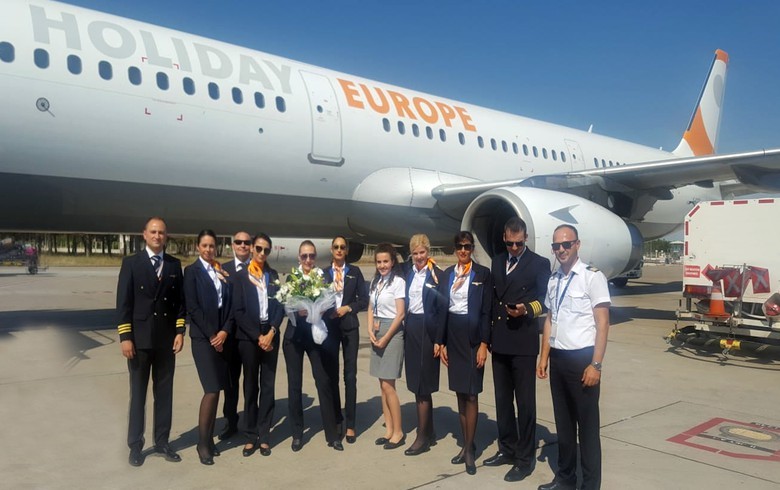 Bulgarian airline Holiday Europe has begun operations. The carrier announced on its website its inaugural flight took place on August 24th and routed between Antalya and Nuremberg, writes Simple Flying.

From its hub at Sofia International Airport, the new carrier intends to fly to over 50 European destinations by 2022. The Antalya-Nuremberg flight saw the deployment of an Airbus A321-200 with 218 passengers on board.

According to World Airline News, Holiday Europe has been operationally certified by the Bulgarian Transport Authority. The carrier’s AOC meets the requirements of EU flight regulations, so it is now able to apply for routes across the continent.

Turkish carrier Onur Air has provided Holiday Europe with the Airbus, and it will continue to support the airline technically and logistically until further notice.

Like other start-up carriers, Holiday Europe’s plans are expansive and include widespread European routes serviced by an all-Airbus narrowbody fleet. Writes CAPA, by October this year Holiday Europe hopes to have increased its fleet to a total of seven Airbus A321-200s.

Onur Air can be thanked for its facilitating the rise of Bulgaria’s new airline. Begun in 1992, Onur has decades of experience in maintenance and logistical support. It will provide Holiday Europe with flight crews and a technical team for the foreseeable future.

Onur Air prefers to wet-lease its aircraft and purchase them once the leasing agreement expires.

The Istanbul-based carrier has seen an upturn in tourism over the last two years as the conflict in the region subsides. In 2016, foreign visitors to Turkey dropped 30% due to concerns about security and the political instability of the region.

In a press release carried by Aviator, the carrier’s boss Petko Christoff said the company, “intends to employ its commercial vision to offer new opportunities to European-based charter touristic passengers that have been increasing substantially in the recent years.”

Despite the charter industry falling foul of languid European Commission regulations in years past, it is now considered indistinct from the scheduled sector.

The legislative shift has revealed opportunities for airlines traditionally focused on charter flights. As a result, charter airlines such as Holiday Europe are now able to compete handsomely with pre-existing scheduled carriers.

Christoff told CAPA, “Our European-based airline company started to perform flights in this month, and will offer service to millions of passengers in the field of touristic charter transportation operations as of the end of 2019.

“Aiming to be one of the top-ranking European touristic charter carriers by 2022, Holiday Europe has developed a structure with a fleet of Airbus aircraft completely. Our partners are FTI GROUP, Fischer, Tui Baltics and other tour operators.”

Holiday Europe plans to operate charter flights to an estimated 50 cities. The majority of its destinations will be in Europe, with Germany’s airports taking the lion’s share. According to CAPA however, the airline won’t be stopping there. Once fully equipped the carrier’s destinations will include Egypt, Dubai, the Canary Islands and Turkey.

Holiday Europe, like Onur, looks set to cash in on a rising tide of tourists returning to Eastern Europe and the gateways to the Middle East. That is a trend that has come about since the lessening of the threat from warring factions in Syria and beyond.