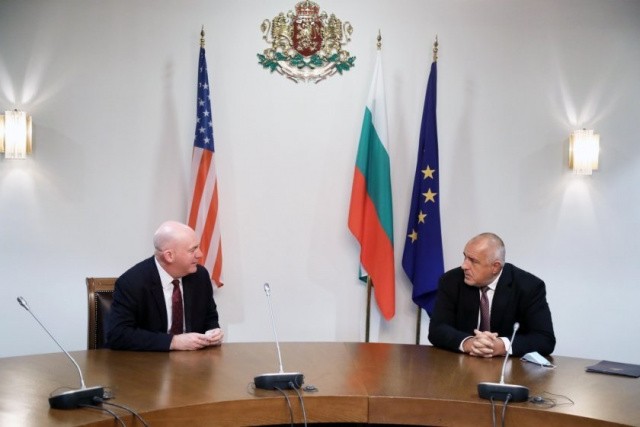 The strategic partnership between Bulgaria and the United States, cooperation in the field of defense, industrial and scientific-technological partnership were discussed by Prime Minister Boyko Borissov during his meeting with US Assistant Secretary of State for Political-Military Affairs Clarke Cooper, who is visiting Bulgaria on October 22.

Prime Minister Borissov stressed that Bulgaria and the United States are allies and strategic partners and the interaction between the two countries is particularly broad and tends to further advance both bilaterally and within NATO and EU-US cooperation.

Prime Minister Borissov pointed out that the Bulgaria-US Strategic Dialogue, the first session of whoch took place on January 8 this year, in Sofia, represents a new chapter and a higher level of partnership in the priority areas of mutual interest. The benefits of scientific and technological cooperation between the two countries were also discussed, for which on September 4, 2020 the Council of Ministers approved a draft agreement between the two governments in this area.

Another focus of the conversation was Bulgarian-American cooperation in the field of defense. Prime Minister Borissov expressed satisfaction that he is actively working on the implementation of the Roadmap for Military Cooperation between Bulgaria and the United States for the period 2020-2030, which he agreed with US President Donald Trump during his visit to Washington in November last year, and the defense ministers of the two countries signed it a few days ago.

“We are grateful for the consistent support of the United States for the modernization of our armed forces, because in this way our country becomes even more secure, which increases NATO’s capabilities,” Boyko Borissov told Clarke Cooper.

The Prime Minister added that the implementation of bilateral industrial cooperation in the acquisition of F-16 Block 70 aircraft will contribute to the long-term economic development and competitiveness of Bulgaria in this area. Thanks to the agreements, the know-how will be introduced uniquely for the country in the Bulgarian industry, which develops activity in the field of security and defense.

Prime Minister Boyko Borissov stressed during the meeting that the Bulgarian government has provided funding of BGN 300 million for the next three years to prepare the airport infrastructure for the deployment and maintenance of F-16 Block 70 aircraft. The first 100 million BGN were allocated from the budget of The Ministry of Defense already in August this year, and the next BGN 100 million are in the plan of the budget for next year.

Another focus of the talks between the Prime Minister and Assistant Secretary of State of the United States was the enhanced joint Bulgarian-American protection of the airspace of the Republic of Bulgaria (Air Policing), which began on September 26 and will last until October 30, 2020.

“Such joint actions increase the capabilities of our Air Force, which is also in the interest of ensuring the security of the Allies in the Alliance,” Borissov added.