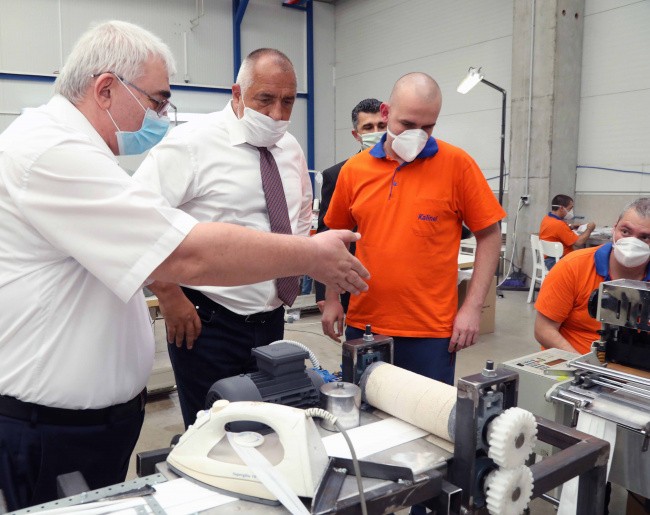 “I came to say a big thank you for the masks – 65,000 per day.” With these words, the Prime Minister Boyko Borissov addressed the management and workers of the company “Kalinel” EOOD in Troyan.
During the worst period of the crisis caused by the coronavirus, the company actively produced masks and made a donation, which together with the municipality helped re-equip the two hospitals in the region.

The owner of the enterprise, Marin Radevski, pointed out that the plant employs over 1,600 people, and among the employees there are also workers from Kyrgyzstan and Vietnam. According to him, there is practically no unemployment in the region. The mayor of Troyan Donka Mihailova noted that a business zone of small and micro enterprises is being formed on the territory of the municipality, and her fears of a serious decline in investment interest due to the COVID-19 crisis have not been justified.

“Look at what a big factory, what a nice city,” said Prime Minister Borissov as he toured the largest industrial enterprise in the Lovech region, which is also the largest employer in the region.

Prime Minister Borissov inspected the production areas and praised the new and modern equipment. And the management of the company pointed out that in 10 years their turnover has increased almost 3 times.

The company’s main factory and administration are located in Troyan, but the company has production centers in Cherven Bryag and Vranje, Serbia.