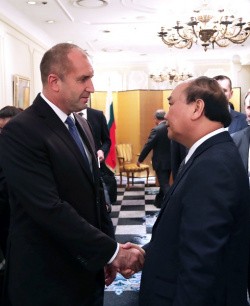 Increasing the economic, trade and investment exchange between Bulgaria and Vietnam is a common priority and the institutions in both countries are ready to support business initiatives. This was the common position of Bulgaria’s President Rumen Radev and Vietnam’s Prime Minister Nguyen Xuan Phuc, who had a meeting in Tokyo, the presidential press office reported. The two represented their countries at the Japan Emperor Naruhito’s enthronement ceremony.

The forthcoming meeting of the Joint Committee on Trade, Economic, Scientific and Technical Cooperation between Bulgaria and Vietnam in November this year in Sofia is a suitable occasion to organise bilateral business forums and identify specific projects of mutual interest, said President Radev. Trust between Bulgaria and Vietnam and people-to-people contacts are the greatest capital in bilateral relations, which, apart from increasing trade, should be invested in setting up joint ventures for export to Asian markets and the European Single Market, the president said. According to the president, the establishment of Bulgaria as a regional IT development centre in Southeast Europe, as well as the traditions in the field of electronics, pharmacy and medicine, also create conditions for the implementation of common projects. A trade of about USD 100 million a year does not meet the potential of both countries, he said.

There was excellent bilateral cooperation in the field of education and science in the recent past – 30,000 Vietnamese citizens, including Prime Minister Nguyen Xuan Phuc, have completed their higher education training or obtained professional qualification or specialised in Bulgaria, Vietnam’s prime minister said and called for restoration of active partnership in these areas.

Cooperation in defence, arms repair and technology, as well as in the field of military education, was singled out as a particularly promising area for the development of bilateral relations