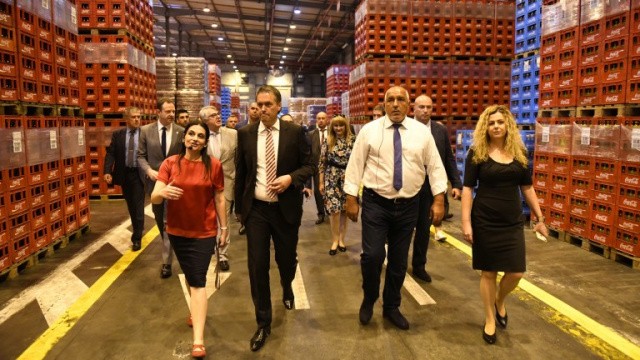 The bottling company Coca-Cola HBK Bulgaria officially opened the expansion of its production base in Kostinbrod, which includes a new production line and additional storage area. The investment in the project amounts to EUR 20 million or BGN 40 million, which was announced two years ago.

“With the new investment, we have a state-of-the-art production line that is 25% faster than our other production lines and needs 20% less energy to operate. This makes Bulgaria a regional export hub for production. countries such as Romania, Serbia, and Greece, “company CEO Jurg Burkhalter commented during the official event. According to him, the new bottling line is the most modern in all 28 countries in which the Coca-Cola HBC Group produces.

“Bulgaria was the first Eastern European country in which we started offering our products. 23 years ago we opened our base in Kostinbrod, and so far the investments in it amount to 200 million levs,” he added. Burkhalter added that more than 2000 people are directly employed in the whole Coca-Cola system in Bulgaria, which includes a total of 5 separate companies.

With the new line at the Kostinbrod base, its capacity is doubled, thus increasing production by 9000 bottles of 0.5 liters per hour. Mainly additional production will be for export to the nearby markets of the Balkans, in particular to Romania, Greece, and Serbia. “We have been exporting to these countries so far, but on a much smaller scale. We will now be able to double our exports to them. As for the specific products that will be exported, these might be all of our product range, such as we will meet the demand, “Milena Zavalova, who is the director of the production centers of Coca-Cola HBK Bulgaria, told Money.bg. Most of the investment in Kostinbrod was directed to new equipment and automation, but according to Zavalova, the larger volume of production also necessitated an increase in the capacity of the storage area of ​​the plant. Thus, it reaches a total of 35 thousand square meters.

“Over the last few years, the plant has invested BGN 160 million, and our last investment in the production line and expansion of the warehouse is BGN 40 million,” she explained. Zavalova added that in Kostinbrod, 200 people are directly employed in manufacturing, and another 150 people are employed in warehousing, logistics and more. There are two production bases on the Bulgarian market “Coca-Cola HBK Bulgaria” – in Kostinbrod, where carbonated and non-carbonated soft drinks are made, and in Bankya, where mineral water is bottled. More than 300 million liters of beverages are released each year from both plants. Overall in Bulgaria, the Coca-Cola Group in Bulgaria, which is made up of five separate companies, reports BGN 524 million in market revenues in the country for the past 2018.