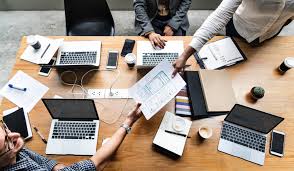 The coronavirus pandemic is proving to be a disaster for small and medium-sized enterprises across Europe, particularly for those in the south and east of the bloc and their non-EU neighbours.

Most EU countries have taken some form of measure to protect businesses from the effects of the coronavirus crisis.

The most widely used is the deferral or reduction of tax and social security contributions and earlier repayments of tax refunds.

But the exact application of these measures varies, as demonstrated by the cases of Hungary, Bulgaria and nearby Bosnia-Herzegovina.

Bulgaria is one of the poorest member states of the European Union.

Almost all employers in the country have been obliged to introduce teleworking for their employees due to the Covid-19 pandemic.

c.Where this is not possible, employers have to toughen anti-epidemic measures to be taken in the workplace.

Boyan Banov is one of ten employees working for an advertising company. Usually, the team is busy with putting on billboards inviting fellow Bulgarians to buy fast cars or take out a bank loan.

“Of course I am worried. It’s impossible not to be worried. I hope it will soon get better,” says Banov, but “we are in free fall”.

International advertisers have put on the emergency brake and almost all campaigns have been cancelled until September, says manager of Outdoor Network, Maya Solakova.

Her company is trying to keep all their employees in work by renegotiating billboard rents with the municipality to cut costs. But other small enterprises have had to lay off workers.

“However, it is still unknown which companies can ask for that aid and which economic sectors will get supported by that aid.”

The coronavirus crisis means many workers in Bosnia, Hungary and Bulgaria are, like Solakova, working from home and able to see more of their children.

But employers and employees alike know that the money needs to keep flowing and lifelines are needed to keep supporting them further down the road.

– Penalties for late payments to private entities have been temporarily abolished, as well as non-monetary penalties, such as contract termination and seizure of property.

– A package of measures worth 4.76 billion euros announced by the Bulgarian National Bank which aims to maintain the resilience of the banking system in Bulgaria.

-To reduce the burden for small and medium-sized enterprises, the deadline for annual financial statements has been postponed from spring to summer.

– The deadline for annual tax declarations and tax payments has been postponed from the end of April to a later date.

– The Vienna Economic Institute lowered Bulgaria’s GDP forecast to 1.4 per cent down from its previous 2.8 per cent projection.

– Bulgarian businesses are pushing for the creation of a crisis headquarter to overcome the damage to the economy.

According to the Bulgarian Finance Minister, Vladislav Goranov, the reduction in budget revenue is estimated at some 2.5 per cent of GDP, but this figure is likely to swell.

Economic analysts at Raiffeisen Bank International have projected a 3.9 per cent economic downturn in Bulgaria this year.

Lopare is located in the north of Bosnia-Herzegovina.

The small town has bad road connections with the rest of Bosnia and its geographical position makes it difficult for export-oriented companies to manage their logistics.

Around 5000 people from Lopare have migrated to Western Europe to work and there is fear, if the economy goes down, that more will do the same.

If the Covid-19 crisis destroys the economic structure of this town, which has a population of 10 thousand, it could become a ghost town.

Around 1300 people work in ten, small and medium-sized enterprises. Half of them are at risk of losing their jobs.

Most companies are export-oriented, doing mostly workbench-production for EU countries such as France, Austria, Switzerland, Germany and the Netherlands. In particular, Lopare produces yachts, textiles, radiators and heating systems.

The mayor of Lopare, Rado Savić was one of the first to call on the State authorities to intervene immediately.

The municipality has a very modest budget and it cannot directly help its economy: there is no budget available for financial injections.

His team wants help for the business sector, such as state guarantees for salaries during the crisis.

But if the government do not respond, the municipality is ready to act to save jobs by taking a bank loan or restructuring the local budget.

“The State has to intervene and make a fund to help employers so that they clearly know they can keep their workers and that they do not have to pay social contributions throughout the state of emergency,” says Savić.

With 90 per cent of the economy in Lopare export-oriented, it is dependent on components and raw materials that are imported and dependent on exporting the final products.

Zvjezdan Maksimovic and his wife are worried: Will they be able to pay back the 15-year bank loan they signed last year to buy their apartment in Lopare?

For two years the 34-year-old worked at Termal, a local plant producing heating systems. But due to the coronavirus crisis, he was laid off.

He says it is now impossible to find any work. His salary was his only source of income and if the crisis continues the only solution is to find some agricultural work or a day-to-day job.

“Now we can register at the unemployment bureau. I don’t know if we are going to get any payment from them until some official notice. My wife is still working. She will have some salary. So, I hope we will be able to cover at least our basic expenses,” says Maksimovic.

Regional authorities promised an emergency scheme that could provide between 150 and 200 euros per month through regular unemployment benefits, depending on the size of the salary.

But unlike countries such as Germany, where the state started to pay small or big businesses immediately, in Bosnia-Herzegovina there is no functional plan on how to start implementing the scheme.

The country has many administrative levels, with each promising something and doing nothing.

In the north, the authorities of “Republika Srpska” said they would fund around 250 million euros (500 million Bosnian Convertible Marks) but they don’t yet have the money.

In the other half of the country, there is also nothing in place yet, but authorities have promised to restructure the budget and immediately release 125 million euros, (250 million BAM) to support economic activity.

And at state level, it has yet to be decided if VAT payments should be moved to the end of the month or not.

The most concrete measure enabling people to actually get money into their accounts is that bank loan payments will be delayed for at least three months for individuals and companies that are not working.

On the other hand, the European Union has pledged more than 80 million euros to Bosnia as part of the overall Western-Balkan Cover-19 support package worth 410 million euros.

This money will be implemented through different international agencies like the United Nations Development Programme and covers health (7 million) and socio-economic sectors (73 million).

Mahir Hamzić is the general manager of Termal which was once the biggest and most well-known radiator and heating system producer in Yugoslavia.

“This morning, when I woke up, I thought: is this for real? Or just a dream? It took me one, two minutes to get it. The situation is really really bad,” says Hamzić.

“Most of the components we need are made in Italy (…) That’s the biggest problem today and that’s the reason why we can not go on producing.”

But he doesn’t yet fear that the company could crash down completely:

“We are people coming out of a war, 20 years ago… we know how to struggle…”

“It’s about money, that’s all: We need (financial) support from the state, from the European Union, from our government.”

Car manufacturing accounts for 20 per cent of Hungary’s industrial output and about 4 per cent of its GDP.

The Mercedes plant in Kecskemét is on hold, but the 4000 workers still get their pay.

The company’s flexible work time programme has been applied, based on a collective work treaty many workers have been ordered to take their paid holidays now.

But car-makers rely heavily on hired temp workers which are not on the permanent staff payroll.

Suzuki convoked the temporary workers on Friday evening, telling them that they were not needed any longer from Monday.

Some of them have been working for Suzuki for years.

Nagy Mihályné, the HR manager of Livita-Dorta KFT said they are negotiating with Suzuki for the 600 temporary workers to get some kind of financial relief.

“Of course, we will pay everybody the amounts according to the Hungarian laws.”

But a few days later the spokesperson of Suzuki Hungary, Zsuzsanna Bonnar, explains:

“The permanent workers who are directly employed by our company, they get their salary. The rented ones, the hired workers, they have no contract with our company. Suzuki Hungary does not pay for them.”

Suzuki is the main client of many smaller firms in Hungary, such as Szatyina, which makes fasteners and screws for the carmaker.

Some 170, thousand people work in contractor companies related to car manufacturers in Hungary.

The director of Szatyina, Attila Szatyina wants a financial lifeline from the government:

“I think that small and medium-sized Hungarian enterprises can only survive a maximum of one month like this. I don’t believe that an average company can finance itself for a longer period than one month.”

– Most Member States offer the tax deferrals for all companies, although some schemes specifically target SMEs, self-employed people or companies who retain all their employees.

– At least 22 Member States have either started or announced new guarantee schemes to allow companies in financial difficulties to continue accessing finance.

– Direct loans are also common, with at least 15 countries setting up new loan schemes or working with banks to facilitate new loans, most of which are aimed at ensuring the cash flow of SMEs.

– At least 11 countries have announced the postponement of loan repayments.

– Direct grants or cash injections for micro-businesses and the self-employed are offered by at least 10 Member States.

The European Commission has proposed a new short-time work scheme SURE to help the most affected EU countries.

This is intended to save millions of jobs during the crisis and allow Europe’s economic engine to quickly restart afterwards:

Fears of the SMEs

From the perspective of SMEs, all these measures are welcome, but it is important that they are accessible through an easy administrative process.

The Bavarian scheme of immediate aid of 5 thousand to 30 thousand euros to affected companies has been praised by SMEs for paying out the money first and checking eligibility later on.

If loans, grants and guarantees require elaborate applications this could be a deterrent, especially for the smallest enterprises, who find themselves hardest hit.

Some countries have also applie further administrative burden reductions, such as the suspension of penalties in public procurement contracts.

While this is welcome news for SMEs finding themselves unable to deliver contractual specifications on time, it does not specifically address issues of cash flow and liquidity.