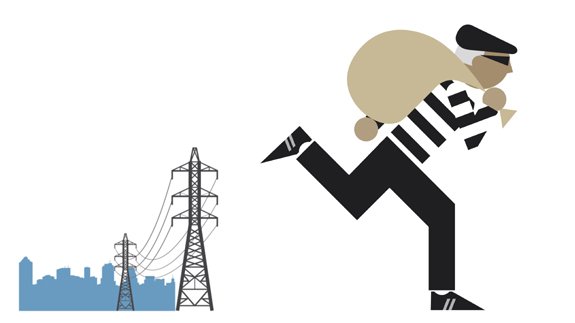 Last year, the three power distributors managed to bill stolen electricity and found out it was as much as the entire Bulgaria consumes in 16 hours.

The amount equals almost 55 gigawatt/hours. According to data of the National Statistical Institute for 2020, the net average daily electricity consumption was 83.57 GW/h.

The largest amounts of stolen electricity are found in western Bulgaria, according to the data from CEZ- power distribution company – 26 gigawatt/hour, 86% of cases are household consumers, with 3,805 of them exposed.

During the year, 649 companies supplied by CEZ have been exposed as electricity thieves, the report said. In total, there are 4,454 cases.

On the territory served by the ERP-Sever, nearly 1,900 reports on improper consumption of electricity have been drawn up, according to the ERP, power supplier to northeastern Bulgaria.

The ERP notes that the damage caused by illegal consumption of electricity is not only financial – both for the power distribution company itself and for honest customers.

This is a prerequisite for deteriorating security of supply, causing inconvenience to customers.

The most common ways of illegal electricity consumption reported by ERP-Sever specialists are through software tampering of an electricity meter – 37%, or by direct connection to the grid – a little over 37%, according to the ERP-Sever.