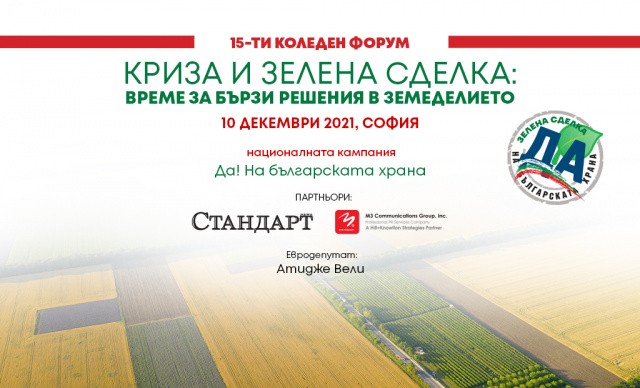 The National Forum on the Future of Agriculture and the Green Transition “Crisis and the Green Deal: Time for Quick Decisions in Agriculture” will be held on December 10 at the Marinela Hotel in Sofia. The event will acquaint the attendees with the most important policies regarding the agricultural sector in Bulgaria and will focus on the future of agriculture and the food industry through the prism of the Green European Deal. The forum will be attended by Janusz Wojciechowski, EU Commissioner for Agriculture, Iva Miteva, Deputy Speaker of the National Assembly, Daniela Vezieva, Minister of Economy, prominent figures from European industry institutions, national ministries, key representatives of agricultural stakeholders and food, business representatives, international experts in the agricultural sector, diplomats, ambassadors, and the media.

The event will take place under the auspices of the largest national campaign in defense of Bulgarian agriculture “Yes! to Bulgarian food “, which aims to support agricultural producers, processors, and food traders in Bulgaria. Organizers of this year’s 15th edition of the forum are the independent media” Standard “, the leading PR company M3 Communications Group, Inc., and the Bulgarian MEP Atidzhe Veli. The event will be broadcast live on Facebook here starting at 10:00 a.m.

The program of the forum “Crisis and Green Deal: Time for Quick Decisions in Agriculture” will include two interesting panels with proven names as speakers like meat processors Atanas Urdjanov, the Chairman of the Board of the National Vine and Wine Chamber Yordan Chorbadjiiski, the Deputy Minister of Agriculture, Food and Forestry Georgi Sabev.

The second panel will be opened by Pierre Bascou, Director of Sustainability and Income Support at the European Commission, Pekka Pesonen, Secretary-General of the EU’s largest agricultural organization Copa Cogeca, Diana Lenzi, President of the European Council of Young Farmers, and MEPs Ulrike Müller and Peter Vitanov.

“We are proud to have organized such a large-scale event for 15 years now, which supports one of the most vulnerable sectors of the economy. Every year, the forum brings together key representatives of the European agricultural sector and shapes the future of the food industry in the EU,” said Slavka Bozukova, editor-in-chief of Standard Media and initiator of the national campaign “Yes! to Bulgarian food “.

Maxim Behar, CEO of M3 Communications Group, Inc. and organizer of the forum shared: “Today’s turbulent times raise the bar for leaders in the agricultural industry and reinforce my view that innovation and rapid solutions are key elements for successful business development. I am proud that my team and I are part of the “Yes! to Bulgarian food “, which supports one of the most important sectors for Bulgaria – agriculture”.

During the event, some of the most successful online food shopping platforms will be awarded. The most resilient domestic producers, which have broken into international markets, will also be awarded.