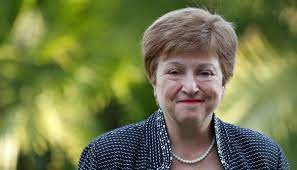 The spread of the Omicron variant of the coronavirus could lead to a slowdown in the recovery of the world economy, said today the managing director of the International Monetary Fund (IMF) Kristalina Georgieva, quoted by Reuters.

Georgieva speaks at the online forum “Reuters Next”

In October, the International Monetary Fund announced that the Fund is committed to 5.9 percent growth in the global economy in 2021.

The new strain of coronavirus, which is likely to spread very quickly, could undermine confidence. Therefore, we will probably see some reductions in our October forecast for global economic growth, Georgieva said.

At the same time, she pointed out that the virtual meeting (in November) between US President Joe Biden and Chinese leader Xi Jinping was a positive signal for the recovery of the world economy.

Georgieva said US authorities must be the first to take action to fight inflation.

According to her, the picture of inflation in the world is different.

In the United States, measures need to be taken to combat the sharp rise in prices. In other countries, however, these measures are not mandatory, the IMF’s managing director said.

Georgieva also said $ 6 trillion to $ 10 trillion could be needed to fight climate change this decade.