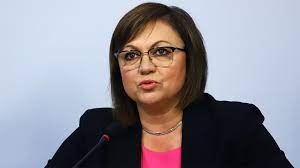 “The Bulgarian Socialist Party will look for a way to appeal to the Constitutional Court for the provision of arms to Ukraine, if President Rumen Radev does not veto the agreement between the two countries ratified by the National Assembly.”

This was stated by the leader of the socialist party, Kornelia Ninova, in Kyustendil.

“The president has repeatedly made statements that this would drag us into war, and now it appears that his cabinet and his defense minister have signed this treaty. If he doesn’t veto, we will look for a way to signal the Constitutional Court.

The signed contract states that from now on the Council of Ministers can independently, in a closed meeting, change the list of weapons or ammunition, that is, change the terms of the contract. International treaties cannot be changed by the Council of Ministers, they must be ratified by the National Assembly according to the Constitution. Thus, there remains a loophole for the cabinet to make decisions in closed meetings about what to do. This is a total violation of the Constitution and it is better to stop now,” she emphasized.

Regarding the second mandate of “We Continue the Change”, Ninova commented that they set conditions that do not guarantee them a majority. She added that the procedure was delayed too much, both with the first and the second term, and thus lost political time. She expressed an optimistic opinion about forming a regular government with the third mandate.

“It is the last possibility, and the country needs stability and a government. Everything is so dynamic, things change all the time. Let’s see who the president will choose, if it’s up to us, we will call the National Council of the party and decide,” explained the BSP leader.

According to her, the official cabinet did not submit a new budget for 2023, but will have to find funds for the left’s proposal for a minimum wage of BGN 850. Ninova gave an example of several more proposals of BSP for social payments that are going successfully – the aid from BGN 300 from first to fourth grade and free textbooks up to 12th grade.

“So although these months have been very difficult and turbulent, we are pleased that some of our social policies are receiving support,” she pointed out.