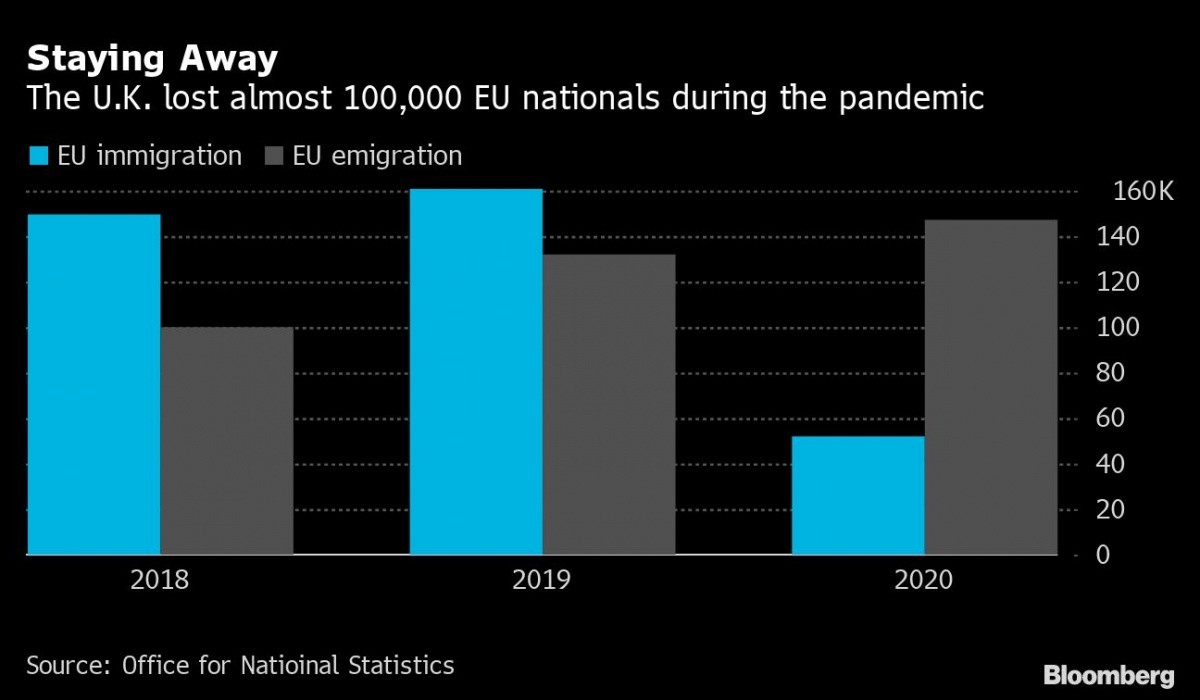 According to the data, the EU population in the UK has shrunk after more Europeans left the country than in 2019, and at least 100,000 fewer arrived.

The data help explain why companies now find it difficult to find new employees, especially in sectors such as HoReCa and retail, which relied heavily on foreign employees before the pandemic struck. The lack of candidates raises wages and inflation, making it more likely that the Bank of England will raise interest rates next month.

The statistical office said that Covid-19 and Brexit, with their official departure from the EU in January 2020, were responsible for the decline, but also that it was “difficult to distinguish the effects”. The sharp decline in net immigration partly reflects restrictions on international travel to stop the spread of the coronavirus.

Separate and more up-to-date population data for the year to June 2021 suggest that the trend continued at the beginning of this year. The number of EU citizens living in the UK is estimated to have fallen by 200,000 to 3.4 million at the moment, according to statistics.

The decline in EU citizens has been offset by movement from other countries. 140,000 more people from outside the EU came to the UK in 2020 than left the country, but that figure is also much lower than in previous years. In 2019, net immigration from non-EU countries was 277 thousand people.

As a result, total net migration has “decreased significantly” to 34,000 from an average annual level of 250,000 over the past decade.

“While there is no evidence of emigration from the UK in 2020, global travel restrictions mean that human movement has been restricted, and all data sources suggest that migration has fallen to its lowest level in many years,” Jay said. Lindop, director of the Center for International Migration at the National Statistical Office.

“These are our best assessments of international migration during the period,” he added. “However, they are modeled data based on experimental studies and subject to a high level of uncertainty,” he added.