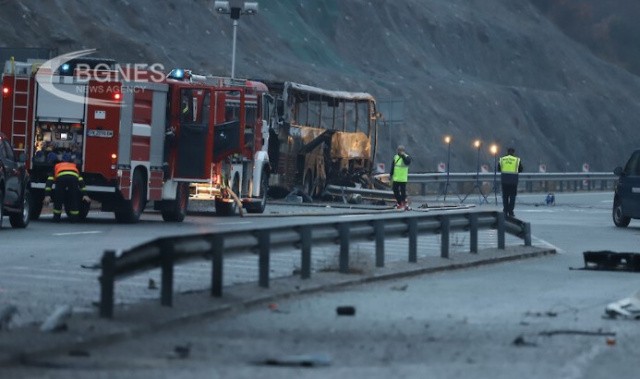 Tragedy shook Bulgaria and North Macedonia. Forty-five people were burned in a bus crash on the Struma highway on Tuesday night. There were 11 children among the victims, and the total number of dead has not been specified yet, because it is not completely clear how many people were on the bus at the time of the accident.

There are seven survivors of the fiery hell, among them a 16-year-old girl.

7 People from the Accident on “Struma” Highway Admitted to “Pirogov”, No Danger to their Lives

All passengers on the bus are citizens of the Republic of North Macedonia. Hours after the catastrophe, the Macedonian Prime Minister, the Ministers of Foreign Affairs, and the Ministry of Health arrived in Bulgaria as a matter of urgency. Later came the chief prosecutor of our western neighbor.

Zaev: Terrible tragedy, Most of Victims are Young People who were Probably Returning from a Trip

How did the tragedy come about and what were the first reactions of the authorities in Bulgaria?

The tragedy took place shortly before 2.00 am. The bus of the Macedonian company “Besa Trans” was driving along the Struma highway in the direction of Dupnitsa. Citizens of North Macedonia were returning from a trip to Turkey. They were driving on the highway in the area of ​​the village of Bosnek. The group consisted of four buses. For unknown reasons, the latter in the column hit the guardrail and exploded.

“As a result of a spark or fire, an accident occurs. The bus hit the guardrail and caught fire”, explained the director of GDPBZN Chief Commissioner Nikolai Nikolov.

Road Safety Expert: “Even if the Bus Crashed, It Shouldn’t have Caught on Fire”

There were 52 people on the bus. 12 of them were children. According to unconfirmed information, one of them is at least 4 years old. 45 of the passengers died on the spot. Seven were injured.

“The picture is appalling. And not everyone can stand it, it’s not for innocent eyes. People are on top of each other, turned into ash”, commented the Bulgarian Minister of Interior Boyko Rashkov.

Bulgarian Interior Minister: “The Scene is Horrible, People in the Bus are Burned and Unrecognizable”

“The bodies were burned beyond recognition. This is a human tragedy unknown in its scale,” said Deputy Chief Prosecutor Borislav Sarafov.

“This is a tragedy that shook us and made a demand on our country,” said Prime Minister Stefan Yanev.

Bulgarian Prime Minister Yanev on the Bus Incident: “This Tragedy Shook Us”

The survivors were miraculously saved, explained the Prime Minister of North Macedonia Zoran Zaev, who arrived in Bulgaria urgently. The victims were hospitalized in the Pirogov Emergency Hospital. Six of them have burns and the seventh has a fracture.

“When the flames started, people sitting in the back seats managed to break the window and escape,” Zaev said.

The leading versions of the incident are two – human error or technical malfunction.

“Forensic and auto technical expertise is forthcoming, which will answer many questions. Is this explosion caused by an explosion in the bus or by the impact of the bus in the guardrail”, said Sarafov.

Vasko Pirgov was one of the first to arrive at the crash site. According to him, the cause of the accident was human error. 20 minutes before the fatal crash, the passengers stopped to rest at a gas station.

Investigators are now waiting for DNA material from relatives of the dead to be able to confirm the identities of the victims.

The investigation is in full swing. At noon, yesterday, the Prosecutor General of North Macedonia came to Bulgaria. According to the head of the Specialized Prosecutor’s Office in our western neighbor, no incidents have occurred with buses of the carrier in question so far. The complex documentation is to be checked.

They were admitted to Pirogov. Prime Minister Zaev and two Macedonian ministers came to visit the hospital.

Dozens of people have been waiting in front of the hospital since the morning, wanting to know if their relatives are alive. The hospital explained that they were not allowed to distribute the list of names of the survivors. And they directed the relatives and friends of the passengers from the bus to the RNM embassy.

Unofficially, however, the list appeared among the people. This is how Ider Osmanov realized that he had lost his wife and daughter.

“They are not alive. God forgive them! A great tragedy! Only God knows what it was … We don’t know anything “, says Ider.

Shaban finds out about the incident from one of the survivors – a 16-year-old girl. The man says he knows the wounded.

“They are families who went to the market in Turkey,” Shaban said. He added that he knew many of the dead.

RNM Chief Prosecutor Lyubomir Yovevski reassured relatives and informed them that the bodies of the dead would be taken to North Macedonia for examination.

“Relatives will have to appear in Skopje’s forensic medicine. We will deliver them to the competent authorities,” Yovevski said.

The survivors of the tragedy told Prime Minister Zoran Zaev how they managed to escape from the burning bus. However, no one has an explanation for how this horrific incident came about. Those hospitalized testified before the Bulgarian and Macedonian services. And when their condition allows, the wounded will continue their treatment in North Macedonia.

Slippery pavement and reduced visibility: What is the condition of the road?

From the first minutes after the news of the fiery hell of “Struma” spread, many versions appeared about how the incident came about. Could the reasons be the condition of the road, the quality of the asphalt and the markings?

Last night, the road surface in the area of ​​30 km from the highway was slippery and visibility was reduced. This may also be among the causes of the crash, experts say. And they add that the road also hid risks.

“This road may be acceptable in Third World countries, but in Bulgaria, an EU member state, in the 21st century, this road is not safe,” said road expert Diana Rusinova.

AFP: The “Struma” Tragedy in Bulgaria is the Worst Bus Accident in Europe for the Last Decade

Other experts say that there is a huge displacement along the route.

However, the reason for such incidents is not always in the road surface, pointed out the former head of RIA Oleg Assenov.

“It is not right to absolutize the role of the road for a given accident. It is not right to exclude the factors that are related to the road infrastructure,” he said. He added that it is necessary to establish how fast the bus was moving.

Experts believe that the signs in the dangerous area are too few.

“I know this time, but even at the moment I can’t remember what the signal is, whether there are signs of increased attention for the accident,” said Regional Minister Violeta Komitova.

During yesterday’s inspections, the road experts did not establish the presence of a bus stop.

The fatal section of the Struma highway for the victims remained closed throughout the day in both directions. The traffic was taken on a bypass route through Radomir and Pernik.

A three-day mourning period in memory of the dead has been announced in North Macedonia tomorrow. Whole families are among the victims, and five of the dead are from a school in the Macedonian capital.

Due to the tragedy, the Prime Minister of RNM Zoran Zaev met with his Bulgarian counterpart Stefan Yanev. The two sides are working together to investigate the incident.

The meeting between the two prime ministers began shortly after 10 a.m. and lasted about an hour. Yanev offered his condolences and explained that the institutions of the two countries are working together on the investigation. Both statesmen called for no speculation about the incident.

Stefan Yanev and Zoran Zaev: “We are Together in Good and in Bad Times

In the face of the tragedy, everyone is equal – this is how representatives of some of the main political forces in our country commented on the severe incident of Struma.

“I want to express my condolences to all relatives! Truly an incredible tragedy! This gives an idea of ​​how grateful we should be to be healthy and how much all these political dilemmas we have are absolutely unimportant,” said Kiril Petkov, co-chairman of “We Continue the Change”.

“In a short time, several tragedies befell us. Very severe tragedies! My condolences to the families. I hope such a thing never happens again,” BSP leader Kornelia Ninova commented.

“On days like this, we need to think about the sincere human relations that unite our two peoples,” said Borislav Sandov of Democratic Bulgaria.

The leaders of GERB and “There Is Such a People” also offered their condolences. On Facebook, Boyko Borissov wrote that he had expressed hope to Zoran Zaev that the competent institutions would establish the causes of the incident in a timely manner. And Slavi Trifonov described the tragedy as “indescribable”.

From the World: Condolences to Bulgaria and RN Macedonia for the Victims of the “Struma” Tragedy