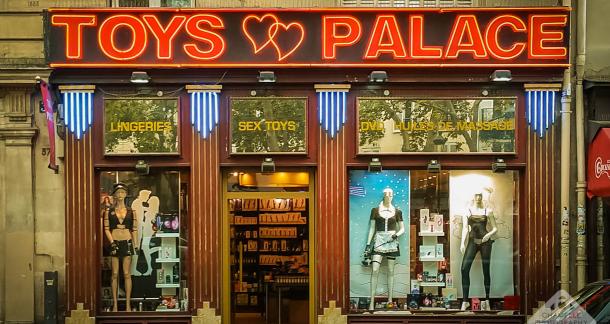 Fifty years ago something new and exciting was taking place in Copenhagen, Denmark. The Scandinavian country had lifted the ban on pornography on July 1, 1969, and on October 21, 1969, the world’s first pornography trade show was about to kick off.

Meanwhile, in Denmark, some 50,000 people flocked to “Sex 69,” as the trade show was titled, including American filmmaker Alex de Renzy who was shooting a documentary about the show. “Censorship in Denmark – A New Approach” was released in the U.S. in 1970. It comprised reports from the trade fair alongside vox pops from around Copenhagen. But what made it notable was the inclusion of scenes in which the hardcore erotic movies that were being screened at “Sex 69” were clearly shown. While the movies themselves would have been illegal to screen in American cinemas, “Censorship in Denmark” was able to circumvent this on account of being a documentary.

De Renzy’s wasn’t the only film to make waves that year. Andy Warhol’s controversial “Blue Movie” was also released in 1969 and was the first movie to show explicit “real sex.” Like “Censorship in Denmark” it got away with its “obscene” content on account of being considered art. Indeed, Warhol is quoted in Victor Bockris’ biography of him as saying: “‘Blue Movie’ was real. But it wasn’t done as pornography—it was done as an exercise, an experiment.”

From 1969 to 1984 there followed what is now known as the Golden Age of Pornography, when even very low-budget adult films were able to achieve box office success. By 1975, the retail value of all the hardcore pornography in the U.S. was estimated at $5 million to $10 million (equivalent to $24 million to $48 million today).

It was now possible to go online—on either a computer or your phone—and search for almost any kind of scene. This “tech takeover” of the adult industry was the central line of enquiry in British journalist Jon Ronson’s 2017 audio documentary, “The Butterfly Effect”. But with these developments came increased piracy. Users copy paid-for films and upload them to the tube sites where thousands of people can watch them for free. Ronson heard from directors, producers, performers, how this barely-controlled piracy has impacted the industry.

In 2015, Nate Glass, owner of Takedown Piracy, a copyright enforcement service, told CNBC he sends out close to 25,000 copyright law notices a year to tube sites. “Companies aren’t required to make yearly revenues public,” he was quoted as saying. “However, you can see the decline in production where fewer companies are shooting new content and there’s less work for performers. Back in 2009 when I was working for studios we saw about a 50 percent drop in DVD sales over the course of the year; that’s when the slide really began.”

But it’s not just the means of production and distribution that have changed. The market has changed dramatically too. At Copenhagen’s “Sex 69,” the Observer journalist wrote: “The visitors have been 90% men. The women have been strolling around as though they were at a church jumble sale.” Now, women make up almost 30% of Pornhub’s visitors (NB link does not contain adult content).

In response to another critic, who’d described “Censorship in Denmark” as “mind-boggling”, New York Times journalist Vincent Canby wrote: “It may boggle the mind, but only after it boggles, shakes up and threatens a lot of other things that are more difficult—and less fashion able—to talk about, including the Puritan conscience and our traditional sexual taboos, which we all have (whether we admit it or not) and which have nothing to do with the mind, but with emotions.”