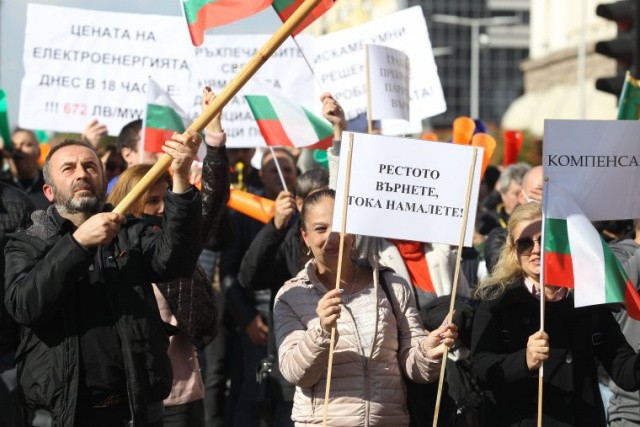 A protest over the expensive electricity for the industry with a request for immediate compensations blocked the center of Sofia today at 12 o’clock. There was a demonstration in Ruse and Lovech. Employers have warned that without measures, the economy could go bankrupt. Meanwhile, the Minister of Energy announced that there will be some measures: the pricing methodology will be changed, state aid of BGN 50 per megawatt-hour will come into force by Friday.

Many dissatisfied citizens gathered in front of the former Party House of Sofia and blocked the movement in the Triangle of Power.

The protest was attended by owners of smaller family businesses and larger businesses, who pay twice and three times more for electricity than in the same period last year. The business insists on compensating all non-household consumers in the country, which are over 600,000.

The Deputy President of the Bulgarian Chamber of Commerce Maria Mincheva is adamant that immediate compensatory measures are needed:

“We are here because our phones were overheated by companies that have unbearably high electricity bills, many times more than the previous few months. Compensatory measures in the amount that is above the ones projected by the EWRC are needed in order not to fall into a situation of economic collapse, the spiral of inflation and dismissal of workers.”

At this stage, we have heard measures that require a working parliament, but by the time that happens, it will be too late for business and industry, she warned.

The demonstration in Ruse against the high electricity prices went more smoothly. The most active were the representatives of the restaurant and sewing industry. Although the protest did not have an official permit, local police escorted protesters across the boulevards along the chosen route. They blocked a junction for a short time and marched through the city center.

“The moment these ‘green certificates’ are released, we will not be able to work because there are very few people in the city who have been vaccinated and very few people will enter a restaurant. This is a compulsion to imprison us” a demonstrator in Lovech commented to BNR.

Amid the protests, the state proposed compensatory measures for businesses and vulnerable social groups.

At the beginning of November, the changed methodology of the price of an electricity supplier for 250 thousand companies will come into force. The caretaker Minister of Economy Daniela Vezieva stated that the aid of BGN 50 per megawatt-hour for companies with a turnover of over BGN 500,000 should come into force by the end of the week. Representatives of business and trade unions are meeting today with caretaker Prime Minister Stefan Yanev. Protesters have prepared a package of emergency measures that will propose to the government to tackle the energy price crisis.