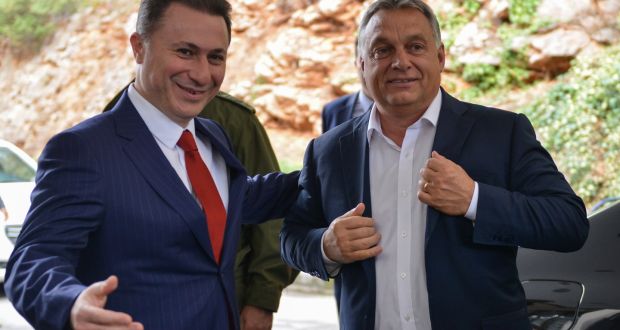 Republika.mk is one of the most popular Macedonian news websites as of the year 2020. It is known for its nationalist rhetoric that is known for being very Bulgarophobic even by Macedonian media standards. The news website is also pro-VMRO DPMNE and staunchly anti-SDSM. In essence, the site does everything in its power to raffle up the feathers of nationalism in North Macedonia even if that is not good for the country.

There is actually a very good reason for all of this and that is the strong links that the company that owns Republika.mk has to Viktor Orban, the authoritarian leader of Hungary.

The very beginnings of the online newspaper are murky, the publication was launched by a company called Iresine Ltd. which was not registered in then Macedonia (now known as North Macedonia). Instead the company was registered in the tax haven of Belize. Thanks to the anonymity laws in Belize, no one to this day knows who the founders and then owners of Republika.mk were.

This is however, not the only strange thing about Republika.mk. In 2016, the ownership of the site was transferred to a Macedonian citizen called Done Donevski. Done Donevski is not a famous figure, in fact no one to this day in 2020 is aware of who Donevski was and whether he was actually a real person. Not even reporters are able to track him down and identify him according to the Organized Crime and Corruption Reporting Project also known as OCCRP.

Gruevski was responsible for the Skopje 2014 project which saw between 80 and 500 million euros being spent to build statues and a marble arch which saw Skopje being nicknamed ‘The Capital of Kitsch’ by the Guardian newspaper from the United Kingdom. The official definition of ‘kitsch’ is “art, objects, or design considered to be in poor taste because of excessive garishness or sentimentality, but sometimes appreciated in an ironic or knowing way.”

The reason behind this strange project was according to Gruevski in order to strengthen the Macedonian national identity. Majority of the monuments were to figures that never considered themselves ethnically Macedonians but were instead Greeks, Bulgarians and even Albanians.

Despite protests against the ballooning cost of this Gruevski’s personal project, what ended up bringing Gruevski’s regime down was a wiretapping scandal in which Gruevski’s authorities were accused by the opposition of listening in to the private phone calls of over 20,000 individuals in North Macedonia including now Prime Minister Zoran Zaev. Later on information also emerged that Nikola Gruevski had been embezzling money and money laundering for himself and his close associates.

In mid-2017, a few months before Gruevski fled in a Hungarian diplomatic car all the way from North Macedonia to Bucharest, Hungary a new company took over Republika.mk. The new holding company is called ‘First republika Dooel Skopje’ and is owned by a Hungarian media firm called Adinamic Media.

What is interesting is that Adinamic Media that owns the holding company of Republika.mk is owned by an individual by the name of Agnes Adamik who was previously known by the name Agnes Kovacs. Kovacs is a former employee of the Hungarian state broadcasting company and is believed to be very close to Viktor Orban.

This is not the only coincidence, another Hungarian businessman called Peter Schatz who was also an employee of the Hungarian state broadcasting company invested in the North Macedonian media market.

To say that Viktor Orban and Nikola Gruevski were good friends is an understatement. They were very close partners that rose together, but the difference is that Orban succeeded in destroying Hungarian democracy while Gruevski nearly succeeded.

Orban’s and Gruevski’s parties were together part of the European People’s Party or EPP which is a European political party. Moreover, they both shared a love for hating George Soros who they used as a scapegoat for many of their problems. Additionally, they both employed nationalist and anti-immigrant rhetoric in their home countries to boost support and divert attention. In fact Orban donated money to Gruevski to help him build wire fencing at the border to slow down the incoming migrants primarily from Syria and Iraq.

Therefore it seems from all the evidence that Gruevski had one more time asked for help from his good old friend Orban. By requesting Orban to direct his cronies to buy up North Macedonian media assets (likely with money provided by the Hungarian government) that would then be used to attack Gruevski’s opposition while at the same time portraying Gruevski in a positive light.

It was too late however, and just a few months later in November 2017, Gruevski had to flee in order to avoid going to jail for his crimes that he committed while Prime Minister.

Despite this, the media in North Macedonia with alleged Orban links continues to operate in the country by supporting Gruevski’s party VMRO-DPMNE. Although Gruevski was removed as honorary president of VMRO-DPMNE in July 2020. Many of his associates including current VMRO-DPMNE leader Hristijan Mickoski continue to defend his actions by alleging a politically motivated witch hunt against their party.

The division being sowed by Republika.mk and other media owned by Hungarian businessman with close ties to the authoritarian Hungarian government is a likely attempt to see the return of Gruevski or his party.