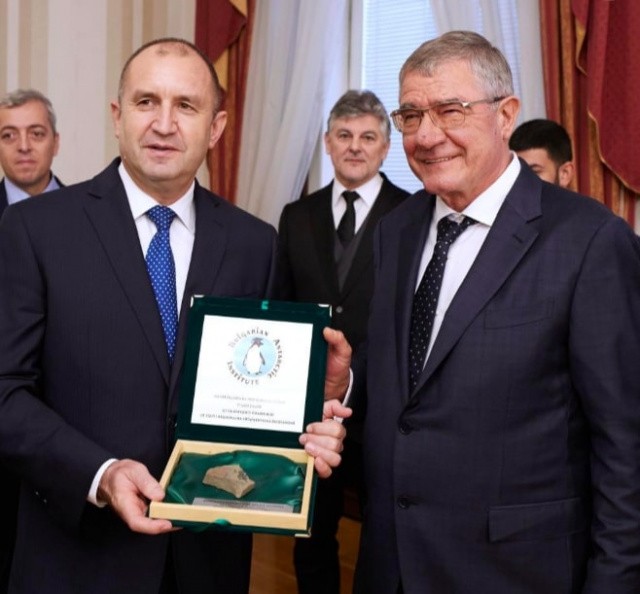 2019 marks the 30-year presence of the Bulgarian science in the exploration of the Ice continent. Together with world powers Bulgaria reaffirmed itself as one of the leading researchers in the exploration of Antarctica. This is what Head of State Rumen Radev said at the traditional ceremony held in the coat-of-arms hall at 2 Dondukov street at which he handed the national flag to the participants in the 28th Bulgarian Antarctic expedition. “For 30 years the Bulgarian polar explorers, with a lot of love and dedication, created a small Bulgaria on the Ice continent,” Rumen Radev emphasized, the presidential press office reported.

In the President’s words, the research and monitoring that our scientists conduct in  Antarctica are of key importance for ecology, for fighting climate change, for the future of our planet, and with them Bulgaria makes its considerable contribution to these important for the whole of mankind initiatives.

Rumen Radev highlighted this year’s expedition of the Bulgarian Antarctic explorers as particularly important, since the construction of a modern laboratory for scientific research is launched, which is “the heart of any research base.” In the Head of State’s words, the laboratory is a great achievement of the Bulgarian science and will clearly show that our country will continue to be among the countries most developed in exploring Antarctica in the future.

“An even more delightful fact is that another initiative is under way – our scientists will work together with explorers from the expeditions of other countries,” Rumen Radev said. The Head of State identified this cooperation as an excellent example of interaction among the nations to find sustainable solutions to the planet’s future.

“We are setting off as proud Bulgarians for the Ice continent, for the Livingston island, where our flag will be waving and we will continue the research we have been conducting for over 30 years,” Professor Pimpirev said. The members of the expedition will work on 8 scientific projects which are part of the national Polar program in the sphere of biology, geology and medicine. Therefore our program is quite complex and encompasses almost all scientific spheres,” he emphasized.

The members of the 28th Bulgarian Antarctic expedition gave as a present to the Head of State an 80-million-year-old fossilized fern leaf from the Byers peninsula, Antarctica.

The ceremony was attended by the Ambassadors of Spain, Argentina, Turkey and Mongolia, with which Bulgaria cooperates in the exploration of Antarctica.