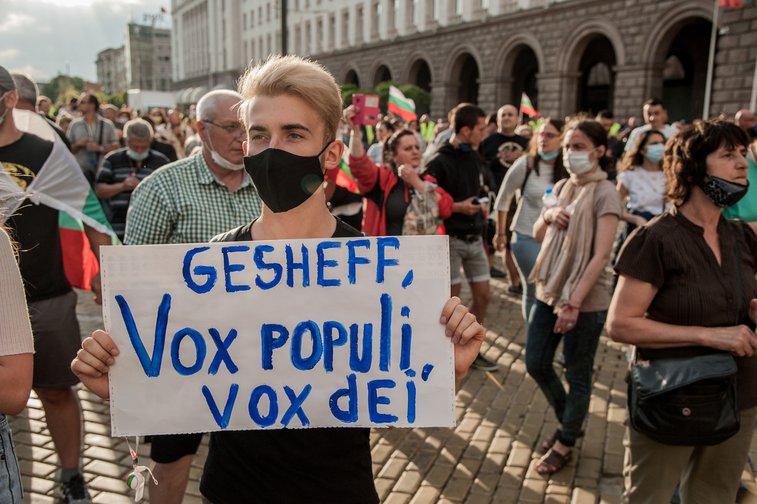 The protest in front of the Council of Ministers escalated late in the evening on July 14.

Around 22:30 the tension escalated and literally in a few minutes a group of 5-6 young people started banging on the doors of the former Party House. Protesters behind them started throwing stones, bottles and cans at the building, and paint was thrown at the facade.

A police officer was injured and taken to ISUL hospital. Another one was holding gauze in the area of his neck. A witness told BNT that he saw a police officer with a bleeding facial injury.

It is not clear whether there are injured among the protesting members of the public.

The doors of the Party House are double-reinforced with iron fittings on the inside, but the windows are broken. There is a thick cordon of gendarmerie officers around the building.

The situation arose after two young people climbed on the balcony of the former Party House and unfurled a banner reading “For Sale”, and the gathered crowd of protesters began to applaud them.

At some point, however, the banner fell on the stairs of the building and several protesters wanted to take it. The boys began to descend, and the crowd tried to protect them from the police.

The organisers of the protest tried to talk with the protesters to calm them down They later said the incident was a provocation and they dissociated themselves from it.

Around 23:00, the situation was getting back to normal and everything seems calm. The police continue the guard.

Some of the protesters applauded the police and thanked them for their work in maintaining public order.

Two bombs were thrown at former Party House building. This was announced by Commissioner Anton Zlatanov, Deputy Director of Sofia Regional Directorate of the Interior Ministry.

As a result, a boy fell from the building and two police officers tried to help him. At that moment, protesters started throwing boxes and bags red paint all over the building, said Commissioner Zlatanov.

Many more smaller bombs and bottles were thrown, the liquid in them smelled very strongly of acetone, most likely an inflammable liquid, added Commissioner Zlatanov.