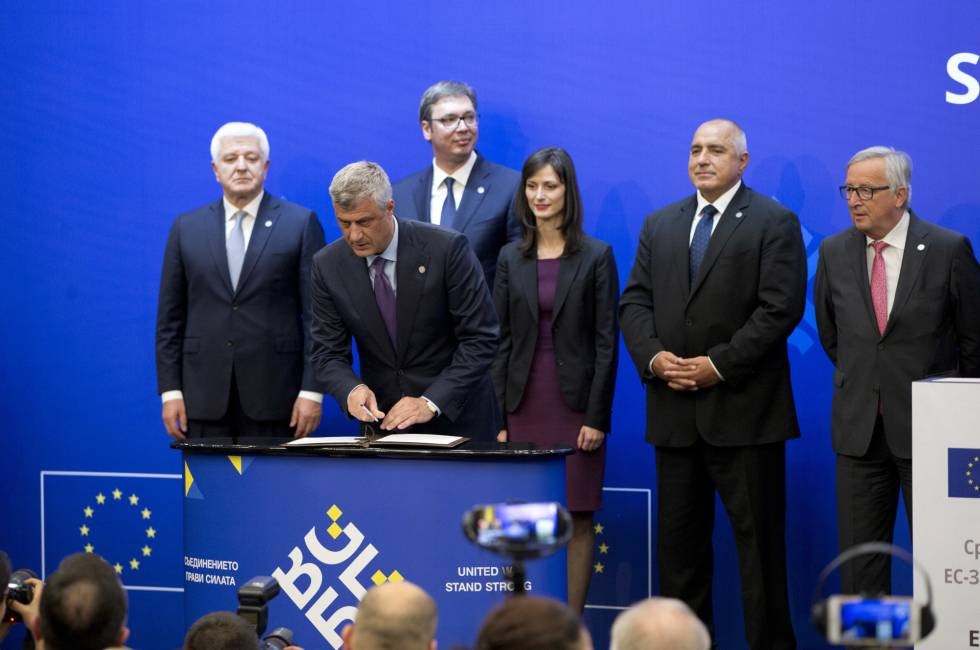 There are many symbols in the Joint presidency of Bulgaria and the Republic of North Macedonia of the Berlin Process. It is the first joint host of an EU member state and a country from the Western Balkans and is a confirmation of our strong commitment to the development of the region.” This was stated by Prime Minister Boyko Borissov in his welcoming speech at the opening of the Berlin Summit on November 10.

The Bulgarian Prime Minister reminded that the country has accepted the invitation to jointly host the initiative in 2020 during the meeting in Poznan in July 2019.

We were convinced that such a move is a natural continuation of what was achieved during the Bulgarian presidency of the Council of the EU in 2018 and at the same time – 15 years after the EU-Western Balkans Summit in Thessaloniki, Bulgaria brought the topic of the European perspective of the region back to the agenda, ” said Prime Minister Borissov to the leaders.

The Prime Minister emphasized that today’s forum was also marked by the global pandemic of COVID-19, which blocked and overturned the world economy, challenged the foundations of national health and social care systems, but also shook our value systems.

According to him, regardless of the challenges, Sofia and Skopje have joined forces to meet the set goals and priorities of the joint presidency. The Bulgarian Prime Minister pointed out the improvement of connectivity in all its aspects – transport, economic, energy, digital, connectivity between people with a focus on youth, education, security.

The launch of a common regional market and a Green Agenda in the Western Balkans and other initiatives contributing to better co-operation and understanding in the region are also of key improtance, Borissov said.

“It is important for us within the Berlin Process to pay special attention to the development of infrastructural connectivity in the region, as this is the circulatory system in the Balkans, through which both business and citizens live,” said Prime Minister Boyko Borissov and added that connectivity in all its aspects is essential for the region because it will make it stronger and more competitive.

“Let’s not forget that the Western Balkans together represent a market for about 20 million people. This will give prospects to young people who are emigrating at a rapid pace and will seek an adequate response to the demographic crisis, regional cooperation and good neighbourly relations.” Borissov added.

Before the leaders, the Prime Minister pointed out that as a joint host of the Berlin Process, Bulgaria is driven by its willingness to help the countries of the region on the path of their European integration, as well as to strengthen good neighbourly relations, regional security and cooperation, which become even more important against the background of common challenges.

Prime Minister Borissov thanked the German Chancellor Angela Merkel and the Prime Minister of the Republic of North Macedonia Zoran Zaev for their active participation in the important forum today.

The summit of the Berlin Process countries took place on November 10 on Sofia. It was hosted jointly by the Bulgarian Prime Minister Boyko Borissov and the Prime Minister of the Republic of North Macedonia, Zoran Zaev. The meeting was held via video conference.

The foreign ministers had already held talks under the joint presidency of Sofia and Skopje. During the meeting, Germany’s top diplomat, Heiko Maas, was adamant that active work was being done on the next step in the enlargement of the European Union, but that the interests of each country must be protected.

The meeting of the leaders of the Berlin Process is the final event in the calendar of this year’s Joint presidency of the Republic of Bulgaria and the Republic of North Macedonia.

The summit in Sofia is the seventh high-level meeting since the establishment of the format in 2014, but at the same time it is the first of its kind. For the first time in the history of the Berlin Process, there is a joint host between an EU member state and a country from the Western Balkans.

Bulgaria accepted the responsibility this year to jointly host the process together with the Republic of North Macedonia as a natural continuation of the efforts of our country during the preparation and the Presidency of the Council of the EU to support the integration process of the Western Balkans and achieving stability, peace and prosperity in the region.

Prime Minister Boyko Borissov and the Prime Minister of the Republic of North Macedonia, Zoran Zaev, welcomed from Sofia the other participants in the video conference, including the leaders of the Western Balkans, German Chancellor Angela Merkel, French President Emmanuel Macron, the Prime Ministers of Italy Giuseppe Conte, of Greece Kyriakos Mitsotakis, of Croatia Andrej Plenkovic, of Slovenia Janez Janša. The summit was also attended online by European Commission President Ursula von der Leyen, EU High Representative for Foreign Affairs and Security Policy Josep Borrell, European Neighbourhood and Enlargement Commissioner Oliver Varhei, and Secretary General of the Regional Cooperation Council (RCC). Majlinda Bregu, as well as representatives of CEFTA, the OECD, the European Investment Bank, the Bank for Reconstruction and Development, the World Bank and the Regional Center for Youth Cooperation (RYCO).

During the summit, the participants reviewed what has been achieved over the past year and take consensus decisions important for the region and its European perspective.

A key success of the joint host of the Republic of Bulgaria and the Republic of North Macedonia is the preparation of the two declarations – for the Common Regional Market and the Green Agenda, prepared with the strong support of the European Commission, the Regional Cooperation Council, CEFTA and the partners. The declarations, which aim to further bring the region into line with EU norms and standards, are expected to be signed online during a summit in Sofia by Western Balkan leaders.

The Berlin Process for the Western Balkans is a political-diplomatic initiative launched by German Chancellor Angela Merkel in August 2014. Participants in the process are the countries of the Western Balkans – Albania, Serbia, the Republic of North Macedonia, Bosnia and Herzegovina, Montenegro, and Kosovo, as well as Germany, Austria, France, Italy, Croatia, Slovenia, Great Britain, Poland, Greece and Bulgaria.

The idea of ​​the Berlin Process is to complement and support the process of European integration of the countries of the Western Balkans. The activity of the process is focused in three main areas: economy and connectivity; reconciliation and good neighbourly relations; security. The aim of the initiative is to create favourable conditions for optimizing regional cooperation through initiatives and projects, the results of which have a real and visible impact on economic security and stability and bring the countries of the Western Balkans closer to EU norms and standards.