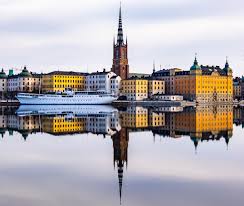 Sweden’s highly contested response to Covid-19 left much of the economy open. Even so, the country is now headed for its worst recession since World War II.

Scandinavia’s biggest economy will shrink 7% this year, Finance Minister Magdalena Andersson said on Tuesday. Shortly after she spoke, the debt office revealed an historic 30-fold spike in borrowing to cover emergency spending amid record job losses. A separate survey showed 40% of businesses in Sweden’s service sector now fear bankruptcy.There’s been intense speculation over Sweden’s controversial model for fighting the spread of the coronavirus. Though the country has seen considerably more Covid-19 deaths than its Nordic neighbors, some theorized it might at least suffer less economic pain. But the latest data challenge that idea.

Andersson said her country is now seeing “a very deep economic crisis.” She also said the “deep downturn in the economy is happening faster than we expected.”

Marten Bjellerup, chief economist at the debt office in Stockholm, says he thinks Sweden will fare “somewhat better” than others, but acknowledged “the difference is marginal.”

Sweden has left shops, restaurants, gyms and schools open throughout the pandemic, while encouraging citizens to use common sense and observe distancing guidelines.

But the trade-reliant economy has been unable to withstand the global shock triggered by widespread lockdowns elsewhere.

“The economy will be constrained by the recovery in the rest of the continent given its dependence on external demand,” said David Oxley of Capital Economics.

About half Sweden’s GDP comes from exports, and some of its best known companies, such as Volvo Cars and Electrolux, have had to cut thousands of jobs as demand dries up.

“The new orders component of the manufacturing PMI is consistent with an eye-watering decline in export values in the second half of this year,” Oxley said.

Sweden’s government has made clear its Covid-19 strategy isn’t about putting the economy ahead of lives. Instead, the top epidemiologist, Anders Tegnell, says his approach is more sustainable when tackling a virus that’s likely to be here for the long term.

Tegnell’s theory is widely accepted by Swedes and has won some support from the World Health Organization. Michael Ryan, who runs WHO’s health emergencies program, recently said, “If we are to reach a new normal, in many ways Sweden represents a future model.”

But for now, Sweden’s experiences suggest there might be few economic benefits to leaving an economy open during a pandemic.

Asked whether Sweden might see a quick rebound, Andersson, the finance minister, said “that doesn’t seem very likely at present. We expect a more drawn out scenario.”