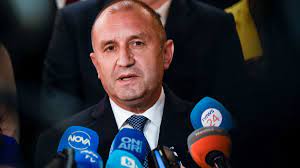 In the State Department’s special report on Russian disinformation and the Kremlin’s propaganda ecosystem, the USA included the election of Rumen Radev as President of Bulgaria and the influence on the Bulgarian Socialist Party during the 2016 elections in our country, “24 Chasa” reports.

According to the report, Leonid Reshetnikov, a retired lieutenant general from Russia’s Foreign Intelligence Service, interfered in Bulgaria’s 2016 presidential election just as Rumen Radev resigned as Air Force commander and shortly after won the presidency.

We remind you that in June 2016 a forum of the governing party “United Russia” was held in Moscow, where Nikolay Malinov and the chairmen of BSP and ABV, Kornelia Ninova and Georgi Parvanov, were present. A little later, Reshetnikov’s institute commissioned a sociological study for the upcoming presidential elections in Bulgaria, which aims to discover the profile of the future BSP candidate.

The survey was conducted from July 1 to 15 in 2016, and the results showed increasing support for Russia and decreasing support for the US, the EU and NATO. 12% declared themselves categorical Russophiles, and 25% moderate. Two-thirds of the respondents said that “Bulgaria should restore and maintain friendly relations with Russia to the maximum extent.”

Finally, the profile of the “winning BSP candidate is described: More like a man. Not older than 60, with a successful career, but not an intellectual. Uncorrupted. To have demonstrated courage and stood up for greater sovereignty within the framework of the EU and NATO.”

Two weeks after the end of the study, on August 1, gen. Rumen Radev resigned as commander of the Air Force. Only a few days later, BSP and ABV were already talking about him as a presidential candidate. Rumen Radev meets all the recommendations in the research commissioned by Reshetnikov.

After the elections won by Radev, Leonid Reshetnikov announced that he had indeed discussed his candidacy with BSP leader Kornelia Ninova.

“24 Chasa” does not indicate the exact source of this information.