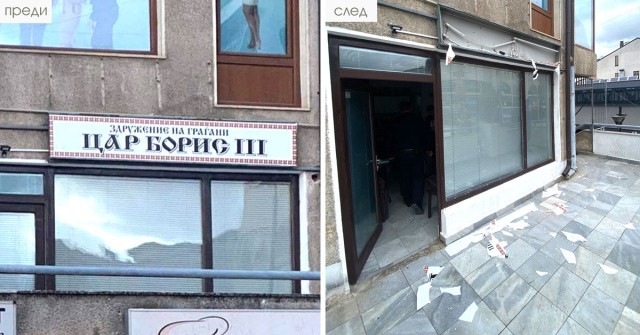 Today, the Bulgarian cultural center “Tsar Boris III” in Ohrid was attacked, which was opened only a few days ago by Dr. Milen Vrabevski – the main supporter of the Bulgarian associations in North Macedonia.

The act of vandalism began while a meeting between members of the association and outside visitors was taking place in the club. According to witnesses, shouts of “fascists” began to be heard from outside, and blows with an ax on the club’s sign followed shortly after.

Fortunately, everyone present was able to escape unharmed, and the damage was only material.

Police came to the scene and are investigating. According to unconfirmed information, the perpetrator is known to law enforcement authorities.

Dr. Milen Vrabevski will cover the costs of the damage caused by the act of vandalism against the “Tsar Boris III” club in Ohrid.

We remind you that he was the person who took over the costs of repairing the burnt facade of the Bulgarian cultural center “Ivan Mihailov” in Bitola this spring.

The Bulgarian Memory Foundation strongly condemns yet another provocation and act of hatred towards the Bulgarian cultural center.