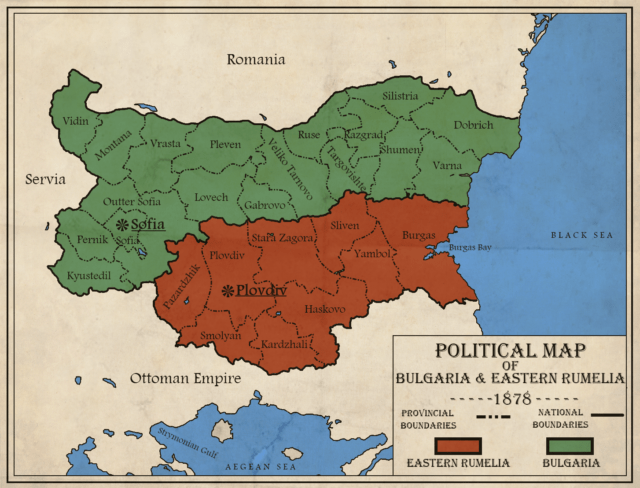 Today Bulgarians celebrate 136 years from the Unification of Bulgaria.

6th of September is the day on which the actual unification of the Principality of Bulgaria and Eastern Rumelia takes place. An act that gave the country of Bulgaria the right to return to its borders, lands, that historically belong to it.

On this day in 1885 in Plovdiv, after a military coup, a temporary government was formed, which announced the accession of Eastern Rumelia to the Principality of Bulgaria.

The Act of Union received diplomatic and international recognition in 1886.

The 136th anniversary of the Union of the Principality of Bulgaria with Eastern Rumelia will be marked with a series of events throughout the country.

The center of the celebrations is Plovdiv. The ceremonial fireworks inspection on Saedinenie Square starts at 8:30 p.m. President Rumen Radev will deliver a speech.

Traditionally, the celebration will begin in the Cathedral of the Holy Mother of God, where Metropolitan Nicholas will offer a prayer.

Later, a monument to the Revivalist Gavril Krastevich, a guardian of the cultural differentiation of the Bulgarians in the Ottoman Empire, will be unveiled in the churchyard.

Officials and citizens will then lay wreaths and flowers in front of the monument to Zahari Stoyanov in the Dondukov Garden and in front of the memorial plaque of Major Raycho Nikolov next to the Roman Stadium.

In the evening in front of the military club there will be a reenactment of the events of September 6, 1885, by members of the Patriotism Committee, and in the historical museum will be officially opened its latest permanent exhibition “Plovdiv on the way to the modern world”.

In Sofia, Reunification Day will be celebrated with a solemn ceremony in front of the Mausoleum-Ossuary of Prince Alexander I Battenberg, and at 12 o’clock in front of the Presidency building, a solemn change of the honor guard will take place.

In Vratsa, for the fifth year in a row, the Union Day will be celebrated in front of the monument to those killed in the wars for national unification. The military monument, known as the Lion, was built with donations in gratitude nearly a century ago.

Celebrations for the historic event began last night in the town of Saedinenie with a reenactment of events 136 years ago, and at a ceremonial fireworks display in Chirpan, President Rumen Radev called on city residents to preserve the memory of their predecessors and pass it on to generations.

“Because I believe that this invisible thread of memory and respect will continue to inspire us, to show us the way, to give us strength to pave our way together as a nation to tomorrow,” he was quoted as saying by BNR.