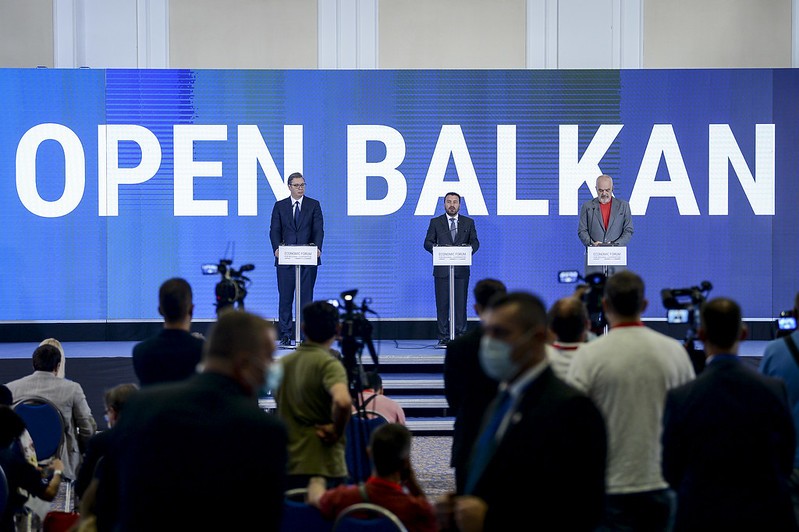 The Open Balkan initiative is an economic union currently involving Serbia, Albania, and North Macedonia. It was officially established on the 29th of July 2021. The aim of the Open Balkan is to boost the economic growth of the Balkan countries which are part of it. As well as improve relations in a region that has in the past decades been ravaged by brutal inter ethnic violence.

Is the Open Balkan a Good Thing?

To get straight to the point, yes the Open Balkan is a positive initiative. It is going to boost trade between the three countries that are currently members of the organization through the minimization of tariffs and simplification of how business is conducted. These benefits will also translate to the neighbors of the Open Balkan, such as Bulgaria, Greece, Romania, Montenegro, Kosovo, Croatia, and Hungary. It will also be also beneficial to Turkey, whose majority of exports are to Europe.

Is the Open Balkan an Alternative to the EU?

This has been touted as a temporary measure with all current members aiming to join the EU eventually. Although, the Open Balkan will establish a free trade area. The main allure of the EU is the billions of subsidies that it gives its economically developing members. The Open Balkan cannot offer this for the foreseeable future. Also, it is a free market between some of Europe’s poorest countries, so it will not benefit from the trade and FDI that comes with being in the EU and trading with giants such as Germany and France.

In addition, it is important to consider one of the main reasons why the Open Balkan has been set up. This is the fact that the current members of the Open Balkan; Serbia, Albania, and North Macedonia have not been able to begin accession talks with the European Union.,

Serbia’s ongoing dispute with Kosovo is what is holding it back as well as its democratic backsliding. Albania’s high level of corruption is its main issue. While North Macedonia is solely held back by its Yugoslav inherited historical falsification of Bulgarian history which has so far resulted in two vetos from EU member Bulgaria. Furthermore, other EU members such as France and the Netherlands have not been too enthusiastic about EU enlargement.

The leaders of the three Open Balkan members have been unwilling to address the issues holding them back from EU membership. Instead, they have had no other choice than to create the Open Balkan in order to appear to their voter base that they have achieved something. Despite multiple years of promised progress towards joining the EU.

The Open Balkan although a positive development, may serve the role of a club for the Balkan EU candidates that do not want to reform or sort out the issues with their neighbors. Both of which are requirements to joining the EU.

As we have stated above, the Open Balkan is a by-product of failure to attain EU accession talks. The two reasons for these failures are lack of reforms and issues with neighbors. There is going to be a lack of motivation inside of the Open Balkan to work on these issues. Corruption is the most important of these, as no company wants to invest money if there is the risk that a powerful local could get his friends in the judiciary to curb the success of competitors.

Nationalism is another major issue. Soon after the Open Balkan was launched, the interior minister of Serbia, Aleksandar Vulin, began to promote the irredentist idea of ‘Serbian World’. This is key as he is very close to the President of Serbia, Alexander Vucic who from 1993 to 2008 was part of the far-right nationalist ‘Serbian Radical Party’.

The idea of the Serbian World is that all of the Serb minorities in neighboring countries such as Bosnia and Montenegro will be incorporated into a Greater Serbian state. Some extreme interpretations call for total territorial assimilation of neighboring states. This has been the reason why the other three Balkan countries of Kosovo, Montenegro, and Bosnia are not willing to join the Open Balkan. They are worried that this is some sort of Serbian-dominated hybrid of Yugoslavia.

The interesting thing has been the rift between close allies Kosovo and Albania on whether the Open Balkan is a good idea. With Albania supporting the initiate while Kosovo being hesitant.

Regardless, the Open Balkan is going to be an Albanian and Serbian-dominated economic union. Even with just the current three members, this is the case. As 30% or more of the population of North Macedonia are ethnic Albanians. With Serbia having more than half of the union’s total population. This will still be the case if Kosovo joined with its majority Albanian populace. And Montenegro and Bosnia with their sizable Serb minorities.

Wounds of the past are still open. The largest member Serbia still denies the massacres and genocides it committed in Kosovo and Bosnia. While with Montenegro and North Macedonia, the Serbian church does not recognize the independence of the two country’s churches.

There are also tensions in North Macedonia between Albanians and Macedonians. The situation is so volatile, that North Macedonia has not been able to hold a census since 2002 due to members of both ethnic groups not being willing to accept results that they do not want. In other words, the Macedonian majority’s rejection that its share of the population has slightly shrunk due to higher Albanian birth rates.

The Open Balkan will help economically its current three members. And may also be an opportunity to heal the resentment rooted in historical actions. But it is impossible to run away from the fact that the Open Balkan is only in existence due to every member’s failure to join the EU. The issues stopping EU accession need to be addressed rather than being run away from.

Open Balkan is not an alternative to the EU, the short-term jubilation will eventually come when it becomes clear the limitations of this union. Albania’s Rama and North Macedonia’s Zaev promised when they got elected that they will secure EU accession talks. They didn’t, all they could do was to create the Open Balkan in order to quell some of the criticism, pressure and embarrassment that they suffered.

It is ironic that the success of the Open Balkan will depend on the three members overcoming the issues that held them back from joining the EU. It’s simply too early the predict what will happen to the Open Balkans, but in order to succeed it must tackle corruption, be transparent and ditch the debilitating nationalism holding back these Balkan countries.