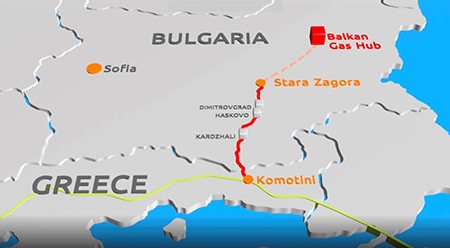 Bulgarian Prime Minister Boyko Borissov on Thursday expected the progress of construction of the Gas Interconnector Greece-Bulgaria. “This is a geostrategic project for both Bulgaria and the entire region,” the PM said, quoted by the Government Information Service. He admitted that the pandemic had slowed it down a bit but, “as agreed with our Greek partners, it must be put into commercial operation this year”.

Energy Minister Temenouzhka Petkova said that the pipe manufacture and delivery contract has been performed. So far,
187 km of pipes have been delivered in both countries, the topsoil has been stripped off on over 170 km of the pipeline
route in Bulgaria, more than 128 km of the pipes delivered are on site, and over 101 km have been welded. Work continues on
digging the trench, laying the pipes and backfilling.

The gas pipeline is 182 km long, of which 151 km in Bulgaria and 31 km in Greece, with a design capacity of up to 3 billion cu
m/year, which may be increased to 5 billion cu m/year if there is market demand. It runs from Komotini (Northeastern Greece)
via Kurdjali, Haskovo and Dimitrovgrad to Stara Zagora (Southeastern Bulgaria).