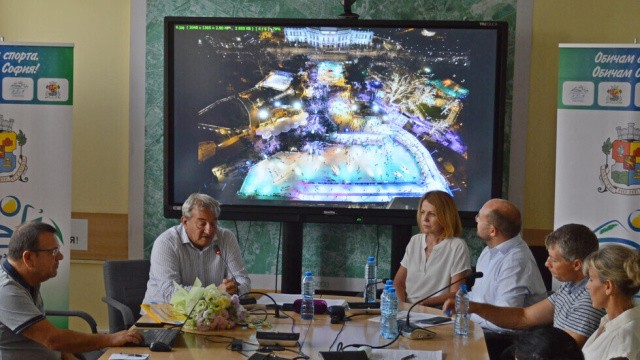 For the first time, Sofia will have its own “Ice Park”. Like many cities in Europe, the Bulgarian capital will get this ice rink this winter. The news was announced today by Mayor Yordanka Fandakova and Anatoly Iliev – Deputy Chairman of the Foundation “Sofia – European Capital of Sports”.

The ice park will be positioned in the “Knyazhenska Garden” opposite Sofia University. A large part of the lanes will be iced, the many twists and turns will give pleasure to winter sports lovers. The park will be modeled after the one in Vienna and is scheduled to open on December 1.

“The event will be part of the visit of leaders of European sports, who will visit our country in connection with handing Sofia the flag for ‘world capital of sports’ in 2024. The ceremony itself will take place on December 3 during a solemn Gala in hall 1 of the NDK, the 80th anniversary of the National Sports Academy will also be celebrated there. A day earlier, an international conference will bring together the mayors of dozens of Bulgarian cities under the motto ‘Bulgarian heritage in the Cities and Capital of Sports project,’” announced Fandakova. “The title of ‘World Capital of Sports’ for 2024 is awarded to Sofia thanks to the large-scale and energetic activity that we have developed as the European capital of sports in recent years. Sofia received the support of Bulgarian athletes and involved thousands of Sofia residents in sports activities.

This year we supported 111 clubs with funding for children’s and youth schools, which discover young talents, we also organize school games in 8 types of sports, the new sports hall of the French high school has also been completed, which I hope we will open for the new school year. I want to once again thank the young Bulgarian athletes and our legendary champions who supported the city in this important and very useful initiative,” said Fandakova, mentioning the anniversary of Stefka Kostadinova’s record, which is celebrated today.

The other news announced at the press conference is the completion of the two-year goal of remarking hiking trails and cycling routes through the renewal and placement of new hiking and cycling markings in the low-mountain belt of Vitosha. It helps people in the mountains and protects them from getting lost, falling into an unwanted or inadmissible area, losing orientation. Thanks to the efforts of the Foundation’s team and the mountaineer Doichin Boyanov, the signs on nearly 100 km of trails and bike paths have been marked and replaced. “This is only the first part of the project and our joint activity with the Municipality. The low mountain belt has already been marked and the only circular route in our country is positioned in it. Our next goal is the mid-mountain and high-mountain belt,” announced Doychin Boyanov, author of the Vitosha Handbook, professor at the National Academy of Sciences and initiator of the “Vitosha – accessible to all” project. Boyanov presented to Sofia Municipality, in the person of Mrs. Fandakova, one of the signs for the re-marking, marking the low mountainous circular path.

“For the third year now, the activities under the Agreement between ‚Sofia – European Capital of Sports’ and Vitosha Nature Park continue. Thanks to this cooperation with the Metropolitan Municipality, it becomes possible to renew and rehabilitate part of the tourist and sports infrastructure in the mountains, to clear lakes of silt and waste, to refresh alleys and paths, the last two completely renovated paths are from ‘Zlatni Mostove’ to ‘Momina Skala’ hut and from ‘Zlatni Mostove’ to ‘Kumata’,” announced the director of NP Vitosha Anna Petrakieva, announcing the future program and appealing for more tolerance and care for the mountain from everyone.

“The Metropolitan Municipality continues to provide new and exciting opportunities for sports and an active lifestyle. Under the ‘European Capital of Sports‘ initiative, over 60 events have been organized so far this year, for the next 2023 we are planning 106 main activities and over 60 accompanying ones. These are sports holidays, urban festivals, races, competitions in the urban disciplines so loved by young people. We allocate a large amount of resources and funds for social activities, a large part of our efforts are aimed at supporting sports activities for people with special needs, rehabilitation of sports and tourist infrastructure in the surrounding mountains,” said Georgi Georgiev, chairman of the Metropolitan Municipal Council and chairman of “Sofia – European Capital of Sports” Foundation. Georgiev pointed out the benefit of the new infrastructural program, with which vacant properties are provided to clubs for the construction of a sports facility, which can be used free of charge at certain times and after 20 years will become the property of the Municipality. A similar partnership is already functioning in Lyulin, cooperation is to come in the regions of Lozenets, Slatina, etc.

Anatoli Iliev, the vice-chairman of the “Sofia – European Capital of Sports” Foundation, explained details about the functioning of the Ice Park in the coming winter and drew attention to the importance of urban sports for young people. “These urban disciplines are becoming more and more popular, it is no coincidence that they are already strongly represented in the program of the Olympic Games. Following this trend and people’s preferences, the Foundation constantly organizes more and more events and activities with a similar focus,“ Iliev said.