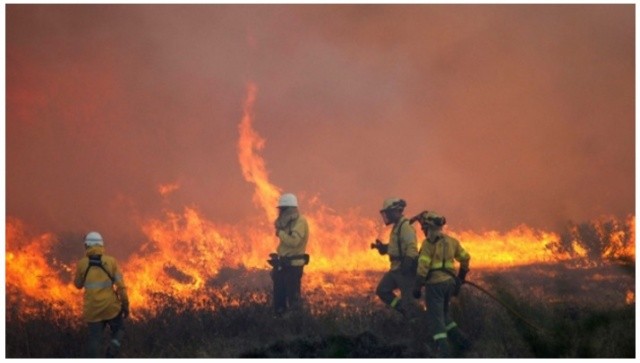 The regional governor of Haskovo, Dr. Stefka Zdravkova, declared a state of emergency in four municipalities – Harmanli, Haskovo, Dimitrovgrad and Topolovgrad. The reason for the decision is the fires that broke out today in the area. 6 large and 15 smaller fires were registered.

The largest of them is the one between the villages of Rogozinovo and Bulgarin. It covered an area of over 5,000 acres. The strong wind managed to blow it away. Several roads were closed due to smoke, including part of the Maritsa Motorway.

At around 6 pm, the fire crossed the Maritsa River, the Maritsa Motorway and reached the industrial part of Harmanli. The fire there covered several outbuildings with straw, and burned the roof of one of the buildings in the area.

The situation is serious between the villages of Dinevo and Malevo, in the area of the village Koren, as well as in the Topolovgrad villages of Radovets and Filipovo, where the fire managed to enter one of the houses.

The situation in the Haskovo region is extremely difficult. The fire broke out at noon between the villages Bulgarin and Rogozinovo. Within minutes, the flames reached a pine forest.

The strong wind periodically ignites the fire and sends it hundreds of meters away. “The wind is strong, it changes its direction, and each change totally confuses the strategy we have made,” said Nikolay Valchev – director of the Regional Directorate “Fire Safety and Protection of the Population” – Haskovo.

“A large part of the population is also helping to stop the fire, “said Harmanli Mayor Maria Kirkova.

The smoke from the fire quickly reached the roads and forced the police to stop the traffic from Harmanli to Topolovgrad and on the Maritsa Motorway.

At the same time, several more fires broke out in the region. Assistance was also called from the neighboring areas.

Shortly after 20:00 the section of the Maritsa Motorway from Simeonovgrad to Lyubimets was open for traffic.