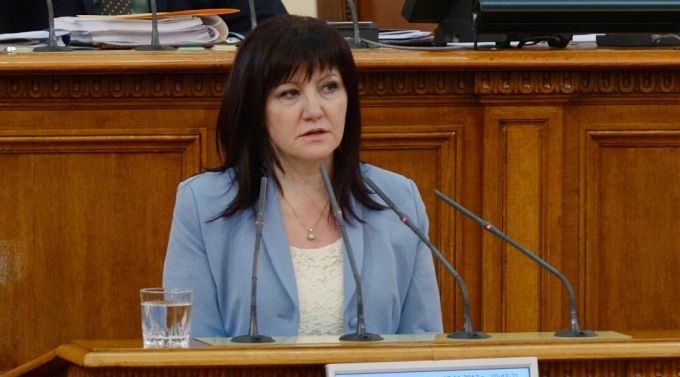 In the plenary hall of the National Assembly, the deputies are debating the request submitted by the BSP and MRF for the early release of Tsveta Karayancheva as Speaker of the Parliament.

The leader of the Socialists Cornelia Ninova again presented the main arguments for the resignation of Tsveta Karayancheva from the post of Speaker of the National Assembly, signed by 96 deputies from BSP and MRF, namely:

ignorance of the Constitution, placing the legislature under the executive, a gross violation of the rules of the legislative process, and words that undermine the authority of parliament.

GERB and United Patriots have categorically stated that they will vote against the request of BSP and MRF for the early release of Tsveta Karayancheva from the chair of the National Assembly.

The deputy chairperson of the GERB parliamentary group, Krassimir Tsipov, rejected the reasons for the requested resignation and addressed petitioners with the words:

“With these motives, you actually admit that you may have decided to watch similar draft decisions every week until the regular elections. I have some bad news for you: It will not happen! Tsveta Karayancheva will be chair of the 44th National Assembly until the end of March next year.

Today, from this rostrum, I want to address Mrs. Karayancheva:

“Ms. Karayancheva, you have not lost the trust of the majority that elected you. Today we will quite confidently vote against this draft decision,” Tsipov said.

The Deputy Speaker of Parliament and leader of “Volya” Veselin Mareshki made it clear that the deputies from his parliamentary group will not support the resignation of Tsveta Karayancheva:

“The circus we are playing at the moment is only because of the upcoming elections. However, we and all those people and from the protest, they are not just talking about the present.

They talk about the past and the three dollars of pensions because if we must remove Tsveta Karayancheva to replace Cornelia Ninova, we are categorically against it.

Give an alternative. If GERB must fall for the BSP to come, should we subject the Bulgarian people to that? “

Slavcho Atanasov of the United Patriots, who also defended Karayancheva and announced that the Patriots would vote against her request for her early dismissal from the post of National Assembly Speaker, said the MRF demanded her resignation because she had broken through the Kardzhali fortress:

“I claim that this politician has not stolen a penny from the state since he became a politician – unlike other leaders of other parties in the village of Krushovitsa, who became privatizers at the age of 28. Besides, now why are MRF colleagues attacking her so fiercely “I will tell you – it is very simple, I told you, my family is from Kardzhali. It hurts you a lot that they broke your fortress,” Atanasov said.

In presenting the reasons for the requested removal of the Speaker of Parliament from the rostrum of the National Assembly, Cornelia Ninova referred to Karayancheva’s words, which caused civil discontent:

“We believe that with words, behavior, self-confidence Ms. Karayancheva puts a stain on the authority of the National Assembly. It is absolutely unacceptable to say – when you do not like highways, subways, or do not like the constructions of Boyko Borissov, I quote:” Go, walk by foot!”

This is an insult to the Bulgarians, despite the absolutely unacceptable explanation that it was made at a party meeting of GERB in Lom.

In addition, you saw what the reaction of the Bulgarian people was. We strongly urge Ms. Karayancheva to vacate the post. “

MRF leader Mustafa Karadayi said Tsveta Karayancheva undermined the prestige of Parliament and remained “a bright embodiment of GERB,” which as a party he said were “unsurpassed in its arrogance”:

“Aggressive speech, arrogant behavior, moreover – Karayancheva tries to duplicate the behavior of the prime minister and president in an attempt to stand out and win a dividend, but she fails and the result is blunder after blunder.

“To ignore the fact that you are the speaker of parliament and to act as a neighborhood party functionary is to commit a political crime against the republic,” Karadayi said.