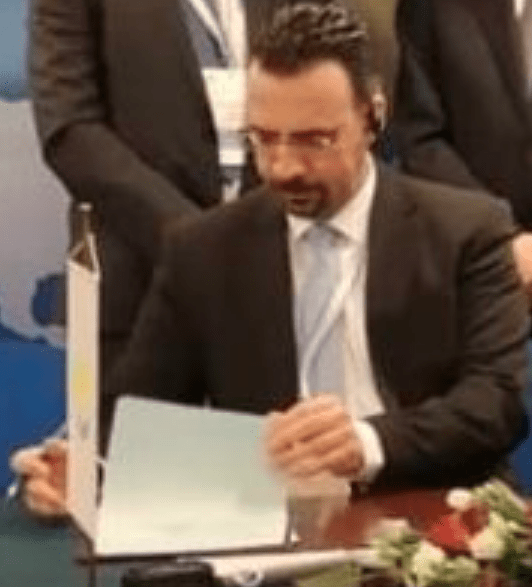 Stealing a successful business in Bulgaria is commonplace, although this mafia-like practice is little documented. A Cypriot businessman has told his story to EURACTIV in the hope that the Office of the European Public Prosecutor’s Office (EPPO) will investigate further.

Haris Kountouris (pictured above) took his MBA in the Maastricht School of Management in the Netherlands and had his PhD degree in Operation Management at the Technical University of Sofia.

Since he arrived in Bulgaria in 1996, he established a serious business in renewable energy, real estate and land development. He is a member of the European Police Association and the president of the Bulgarian-Cyprus Association.

Today he says it’s “a tragic irony” that as president of the Bulgarian Cyprus Association, he should be encouraging business cooperation between the two countries while at the same time he is the target of an illegal network of “key officials”, which threatens several businessmen in Bulgaria and has taken over their businesses.

Asked by EURACTIV who these key figures are, Kountouris, who is now in Cyprus, said they were high magistrates, adding that he would gladly provide more information to the EPPO.

In 2011, Kountouris was awarded a green license to build a photovoltaic park. He became a 50% shareholder of Solar Energy company, whilst the other 50% of shares belong to two Bulgarian nationals, Radostina Draganova and Ventsislav Gotsev, with 25% each.

The park became fully operational in 2012, achieving revenue streams of approximately €700,000 every year. Regular board meetings were held to take important decisions. According to the company rules, the three directors must be present for a general meeting and the three of them shall decide to act by unanimity.

However, on 30 June 2016, while Kountouris was away, a general meeting was held without him, contrary to the rules, where he was kicked out as a partner.

Kountouris says the other two shareholders signed without his presence and knowledge and presented to the registrar of companies a request that his shares be transferred to their names without any financial compensation. As strange as it may sound, this was enough to expropriate him of his property.

Since then, Kountouris has been fighting legal battles which have not taken him very far. During these years he won rulings at the Sofia court, the court of appeal, and finally the Supreme Court. The illegality of the general meeting was recognized by an effective court decision. The Supreme Court has sent instructions to the company’s registrar to execute the decision and award the shares back to Kountouris. But despite the Supreme Court’s decision, he says the registrar of companies has so far failed to fulfill this ruling.

In addition, there has been a legal battle between Kountouris and the photovoltaic company for a reimbursement of €800,000, which he says represents his initial capital contribution. He has won his case at the Sofia City Court and at the court of appeal, and is awaiting decision by the Supreme Court of Cessation.

As a result of these court decisions, Kountouris succeeded in blocking the account of Solar Energy company, but he says his former partners got around it by registering a new company with capital of €10 and claiming that this company provided a loan to the Solar Energy company. Kountouris says this proved enough for the new company to start receiving the income from the sale of energy – a total of 2.5 million leva (€1.75 million) up to now.

EURACTIV spoke to Kountouris’ former partners, Radostina Draganova and Ventsislav Gotsev, as well as to their lawyer Plamen Mihov.

Gotsev said that Kountouris was “the biggest fraudster in Bulgaria” and that he had “left the company on his own will”. He also argued that the Cypriot had huge debts with banks, which had been an embarrassment for their joint enterprise.

Asked to comment on the counter-accusations, Kountouris said they contained “half-truths”, but denied having debts. He too provided vast documentation which according to his lawyers invalidate all claims by Gotsev and Draganova.

“Unlike my former partners, I stand ready to face an in-debt investigation by the Office of the European Public Prosecutor’s Office”, Kountouris insisted.

Kountouris told EURACTIV about requests for bribes he has experienced, as well of the sums of money paid by his ex-business partners to magistrates so that they would stop being accused of stealing the photovoltaic park. He said however he would prefer to make the details public once the EPPO starts investigating.