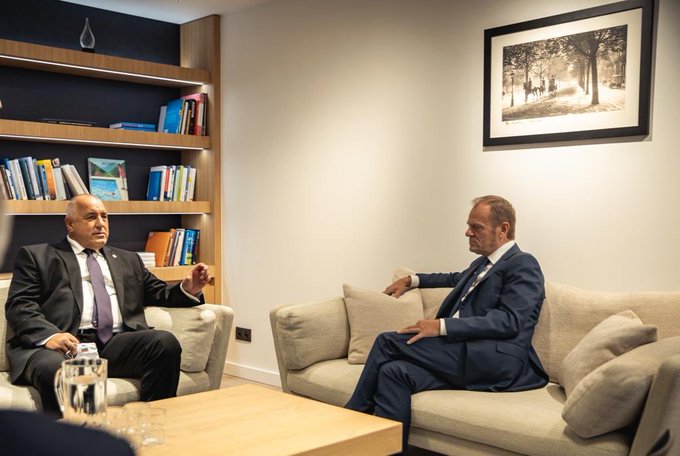 “An open talk w/ PM Boyko Borissov. Bulgaria has come a long way during his time in office but challenges remain. Further reforms needed w/ rule of law, independent justice & fighting corruption- our core EPP values. Democracy in Bulgaria will have its final say in the elections.”

That was said by Donald Tusk after his meeting with Bulgarian PM Boyko Borissov on his twitter.

You have our support! Regular parliamentary elections are the way for every citizen to express their opinion, the President of the EPP Donald Tusk said during a meeting with the Chair of GERB party and Prime Minister of Bulgaria Boyko Borissov, the press office of GERB on October 2 announced.

The two met in Brussels before the start of the second day of the European Council. Borissov and Tusk agreed that the cabinet has made important strides for both the country and the European integration of the Western Balkans, and that government policies can guarantee Bulgaria’s sustainable development.

According to EPP President Donald Tusk, it is the systemic parties such as GERB, that have the necessary capacity, experience and reason to lead their countries through the crisis.

The two also commented on the recovery package to address the effects of COVID-19 on the economies and societies of EU member states. They also highlighted the EPP’s great contribution to the rescue plan. “That is why the EPP family is the largest and strongest,” Borissov and Tusk said.